If a large amount of taxpayer money is sitting around, you can bet that staff and officials will make sure to use it hastily and in the most corrupt, wasteful manner possible. 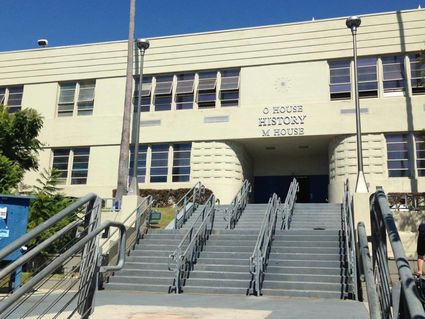 The Santa Monica-Malibu(for now) School District seeking to demolish the art moderne History building in the center of the Samohi campus teaches the public an important civics lesson. Never vote in favor of school bond measures. You may have five children in the district - you still shouldn't vote for them. Here's why.

School bond money cannot be used for the things your children actually need: more teachers, smaller class sizes, high-quality teaching staff. It can't even be used for better maintenance or more security. This money can only be used for physical capital improvements. And if large amounts of taxpayer money is sitting around, you can bet that staff and officials will make sure to use it hastily (before everyone else cottons on to its availability) and in the most corrupt, wasteful manner possible.

The History building at santa monica high school sits in the center of campus, presiding over the main quad and entrance to the cafeteria and administration offices. Originally built in 1913, it was rebuilt after severe damage in the 1933 earthquake in a Streamline Moderne style, matching beautifully with the other WPA project on campus, the magnificent Barnum Hall auditorium. Barnum Hall was lovingly renovated to a splendor that makes it fully booked for rental by outside entities.

Refurbishing and renovating the History building would cost an estimated $29 million, according to the school district's own architect, reports the Save Samohi History group. The building is completely up to code and has no safety defects. It is beloved by the community, the Samohi Alumni Association, Santa Monica Conservancy, and its proposed demolition was featured as a matter of concern by the National Trust for Historic Preservation in its latest magazine issue.

The school district's paid architectural history consultant (IOW hired gun) claimed the building lost its historic value by getting rebuilt after the earthquake. However, a 1933 building that has seen generations of Santa Monica students walk through its doors, been featured in major motion pictures, and holds aesthetic value of its own obviously holds historic value in its own right. Nobody who doesn't have a financial interest in the matter (i.e., a disinterested party) wants to see the building torn down.

Besides this, construction of a new building to replace the demolished History building would cost $165 million. That is over five times the cost of renovating the existing, historic, and beloved structure.

It is obvious that the school district has an agenda completely separate from what is sensible, economical, or even moral. Samohi already demolished an indoor swimming pool (you know, so kids can swim all year round and not freeze their butts when it's still cold in April) to construct an utterly impractical outdoor swimming pool. The reason the school principal gave at the time of the decision for the downgrade was, "it smelled so much like chlorine inside the building." 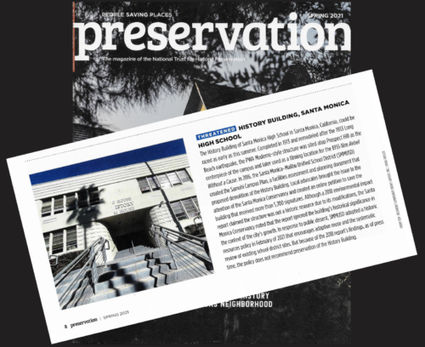 Also demolished on campus was a science building. The building constructed to replace it includes strange stairways, wasted corners, and is ugly as sin.

Meanwhile, the bathrooms are noxious pits with fixtures that don't work, missing lights, and peeling paint. The pavement on campus is pitted with the debris of decades and is never cleaned. Nothing sets the tone of a space more than the paving, and the paving at Samohi (and other district campuses) is a squalid scandal.

But staff and elected officials at the school district want to spend $136 million more than they have to - and more than anyone wants them to - on a new building that is guaranteed to be an eyesore.

Somebody - no, many people are - thinking to get a piece of that money as the construction project moves through its wasteful, dirty process. There is no other explanation for such a destructive, inexplicable decision to destroy a piece of history and beauty.

A well-written and persuasive article. I wish it were more well-read. My friends know little of local news. For a long time I was more likely to know the details of political scandals in Washington, D.C. It has gradually dawned on me that there's plenty of muck to rake right here at home. Other than letter-writing, voting and petition-signing, what is to be done? Lawsuits are sometimes handy, but there's no law against stupid. Unless dots can be connected between an official and a cpontractor - what can we do?

Yes, this is ALL about waste and doing favors for various contractors and corporations. It doesn't matter how big the budget is, school boards and administrators are notorious for financial mismanagement and waste. In fact, it's practically a requirement for the position. I don't know any school administrator or board member who manages the school finances like they manage their own. I also never understood why Santa Monica High School needs an enormous university-like campus in the first place. Why on earth do they need a history building, a science building, and arts center and so on? Can't they teach these subjects in the same building like every other high school? Just looking at the enormity of the campus gives you a good idea of the overall waste and spending mindset.