The Park, hearkening back to an earlier version in the 1930s, was closed for over a year due to the California lockdown

The Santa Monica pier is a global destination; here it is advertised by India TV

Since 1996 the two-acre amusement park has entertained more than 25 million guests, provided over 60 million rides on its 12 classic boardwalk attractions and awarded more than 4.75 million pieces of plush and prizes at the midway games. The Park also spun over 1.1 million pieces of cotton candy, scooped more than 105,000 gallons of ice cream and brewed over a perky 1.6 million cups of coffee.

All this month, Pacific Park has been reflecting on a quarter-century of fun on the Pier by sharing memories and archival photos on Facebook and Twitter; Pacific Park's "Top 10 Highlights 1996-2021" includes:

- 2013: Pacific Park's Ferris wheel was selected by Travel + Leisure magazine as one of the "World's Coolest Ferris Wheels."

- 2015: Yahoo! Travel announced its "The Best Amusement Park in Every State" with Pacific Park on the Santa Monica Pier taking top honors in California.

- 2016: In light of its 20th Birthday celebration, Pacific Park on the Santa Monica Pier introduced a new Ferris wheel lighting package in 2016.

- 2019: Netflix takes over the Santa Monica Pier with their "Stranger Things" premier celebration. Fans of the show were invited to walk through an immersive 1980s Hawkins, Indiana, experience complete with 1980s bands, theming from the show, and specially curated treats and prizes.

- 2020: Pacific Park honored doctors, nurses, medical staff and healthcare workers for more than 300 nights on the Pacific Wheel during the once-in-a-lifetime COVID-19 pandemic in 2020.

Following the closure of Pacific Park's business for more than 13 months due to the coronavirus, ride operations, including the Pacific Wheel, resumed on April 2, 2021, with limited operations under guidance from the state and county. Los Angeles County is now in the yellow tier, which permits amusement parks, including Pacific Park, to welcome guests back to the rides and midway under limitations to allow for social distancing and safe enjoyment of the outdoor attractions.

"While we are extremely proud to celebrate the Park's anniversary, we could not have imagined being at this point in Pacific Park's 25-year operation and presence on the Santa Monica Pier. This has been a very long journey. We have strived to navigate the pandemic safely with the wellbeing of everyone associated with the Park," says Jeff Klocke, Vice President and General Manager at Pacific Park on the Santa Monica Pier. "I welcome everyone back and appreciate seeing guests in the Park as they enjoy an amusement ride, playing a midway game or sharing a funnel cake. And it is spectacular to watch the world-famous solar-powered Ferris wheel turn again against the backdrop of the setting sun, Santa Monica Coastline and Pacific Ocean." 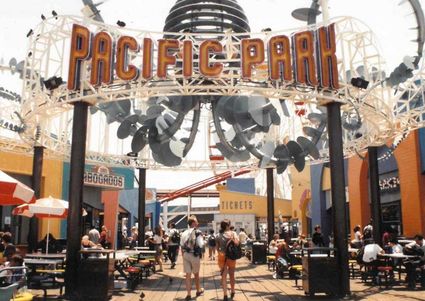 Pacific Park's rides are currently open to the public. The Park is also offering select services in its over-the-ocean dining plaza, beachside retail, and midway games. Following written guidelines from the state, guests should expect new experiences including the option to purchase ride tickets online in advance of their visit, a single entrance to the ride area at the east side of the Park, and monitoring the number of people in the Park at one time.