Britney Spears Accuses Conservatorship of Not Letting "Me Take Out my IUD So I Can Have Another Baby." 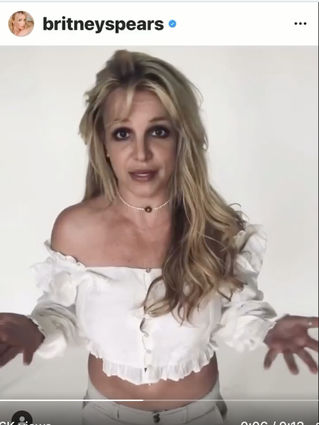 "I have an IUD in my body right now that won't let me have a baby and my conservators won't let me go to the doctor to take it out," Britney Spears said in a hearing on Wednesday.

Britney Spears has committed no crime, she says. She alleges that her father and his conservatorship are blocking her from living her life, and becoming a mom again.

The mother of two is of course one of the most successful musicians of the last 20 years. But she seemed to be suffering from bipolar disorder in 2007. That year, her father went to Court and proved by clear and convincing evidence that the pop queen was not able to manage her own financial affairs. Her father, Jamie Spears has managed her money ever since. This month, Britney Spears again moved to take control over her own financial affairs.

"I have an IUD in my body right now that won't let me have a baby and my conservators won't let me go to the doctor to take it out," Britney Spears said in a telephonic hearing on Wednesday.

"He loved the control he had over me, one hundred thousand percent," said Spears at the hearing, in reference to her father, who was reportedly not on the virtual call. She said she'd like to sue her father and family. She says she has been forced to see her therapist 3 times a week in Westlake Village, where paparazzi photograph her. She would prefer to have a therapist visit her. "My dad and anyone involved in this conservatorship should be in jail. I truly believe that this conservatorship is abusive," she said.

As for Mr. Spears, he told the press that he is sorry to see his daughter in so much pain and he loves and misses her. He is reportedly living in a trailer parked behind a warehouse in Shreveport, Louisiana. This despite being paid $16,000 per month to manage Britney's affairs. 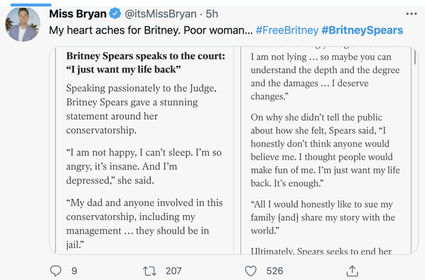 "He loved the control he had over me, one hundred thousand percent," said Spears at the hearing, in reference to her father, who was reportedly not on the virtual call.

Spears, who turns 40 in September is credited with influencing the revival of teen pop during the late 1990s and early 2000s, for which she is referred to as the "Princess of Pop". After appearing in stage productions and television series, Spears signed with Jive Records in 1997 at age 15. Her first two studio albums, certified diamond in the US, ...Baby One More Time (1999) and Oops!... I Did It Again (2000) were global successes and became two of the best-selling albums of all time, along with making her the best-selling teenage artist of all time. The former's title track was named the greatest debut single of all time by Rolling Stone in 2020 and the latter held a 15-year record for fastest-selling album by a female artist in the United States with first-week sales of over 1.3 million copies, says Wikipedia.

Due to a series of highly publicized personal struggles, promotion for the album was limited, and she was later involuntarily placed in a conservatorship in 2007. Since then, she released the chart-topping albums, Circus (2008) and Femme Fatale (2011), the latter of which became her most successful era of singles in the US charts. She embarked on a four-year concert residency, Britney: Piece of Me, at Planet Hollywood Resort & Casino in Las Vegas to promote her next two albums Britney Jean (2013) and Glory (2016). Since 2019, Spears has been involved in a legal dispute over her conservatorship.