Friday, officers found a male victim who had suffered blunt force trauma on the sand near Ocean Front Walk and Dudley Avenue. 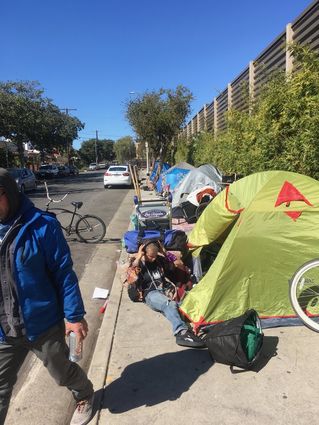 A homeless encampment on the Venice Bike path/boardwalk

LAPD has announced that it has arrested a suspect in the bludgeoning murder of a homeless man inside a tent on the Venice Boardwalk Friday 6/25/21. The man died from blunt force trauma, meaning the suspect allegedly hit him over the head hard enough to cause death. 38-year-old Michael McClain, of Venice, was booked for Murder. The LAPD's press release is below.

On June 25, 2021, around 3:20 p.m., Pacific patrol officers responded to a call of a dead body inside of a tent, on the sand near Ocean Front Walk and Dudley Avenue. When officers arrived, they found a male victim who had suffered blunt force trauma.

The investigation revealed someone heard yelling and possibly a fight in the early morning hours. Later in the day they noticed that the tent was collapsed. The 911 caller checked the tent and found the victim dead. The victim had an ongoing dispute with the suspect and another homeless person.

On June 25, 2021, at 5:53 p.m. Pacific officers located and detained the suspect at 3rd Avenue and Sunset Avenue at another homeless encampment. He was detained and questioned by homicide investigators. The suspect, 38-year-old Michael McClain, of Venice, was booked for Murder, 187 PC. 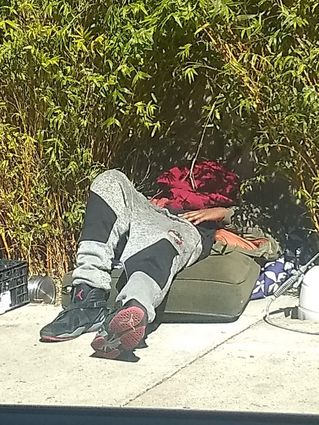 A homeless man in venice.

The case will be presented to the District Attorney for filing consideration on June 29, 2021.

This is an ongoing investigation, anyone with information should contact West Bureau Homicide investigators at (213) 382-9470. During non-business hours or on weekends, calls should be directed to 1-877-LAPD-24-7 (877-527-3247). Anyone wishing to remain anonymous should call the LA Regional Crime Stoppers at 1-800-222-TIPS (800-222-8477) or go directly to http://www.lacrimestoppers.org. Tipsters may also visit http://www.lapdonline.org, and click on "Anonymous Web Tips" under the "Get Involved-Crime Stoppers" menu to submit an online tip. Lastly, tipsters may also download the "P3 Tips" mobile application and select the LA Regional Crime Stoppers as their local program.