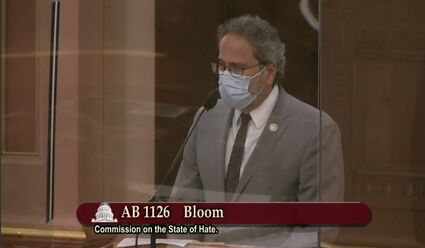 Legislation to address the growing epidemic of hate crimes has just passed the Senate Judiciary Committee.

The bill, AB 1126, authored by Assembly member Richard Bloom (D-Santa Monica), would establish the first statewide commission in California to not only accurately monitor and track hate crimes and incidents, but to formally recommend policy to the Governor and State Legislature.

The bill – supported by groups such as the Anti-Defamation League, Equality California, and Islamic Networks Group – now heads to the Senate Committee on Appropriations.

According to the Center for the Study of Hate and Extremism's 2020 Report to the Nation, hate crime totals for 2019 hit their highest level in over a decade with over 7,000 hate-crime "incidents" reported. In 2020, anti-Asian hate crimes surged by 149% and hate crimes against gay men jumped nearly 30%.

"Due to the staggering statistics and challenges of monitoring, collecting, and analyzing this data, it is clear that California needs better tools and dedicated individuals to help us track and report this information," said Bloom. "The Commission on the State of Hate will monitor and assess current trends relative to hate crimes, produce annual reports on these trends, and make policy recommendations in order to help the State better address, and, hopefully, reduce instances of these crimes."

The FBI relies on the voluntary reporting of more than 15,000 participating law enforcement agencies across the country. Last year, 86% of them did not report a single hate crime, including at least 71 cities with populations over 100,000, according to the Anti-Defamation League and the Sikh Coalition.

"The Commission is necessary in order to fully understand who is perpetrating these crimes, who is being targeted, and how we can develop policy solutions to address and reduce the instances of these crimes," said Bloom.