27 seconds of Terror: viral video posted to Youtube and seen by millions. Is the giant lizard a nuclear freak, like Godzilla and Rodan?

A pedestrian in Palisades Park recently recorded video of a dragon consuming a giant June Beetle. The video has been posted to YouTube and has gone viral.

Ok, fine, it was really a Western Fence Lizard, not a dragon. And the other character is probably a June bug. But it was June 16th, 2021, that part is verifiably true. 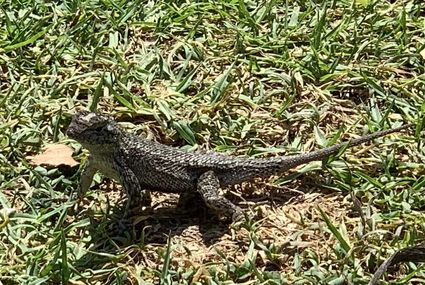 The western fence lizard (or blue belly), common throughout Southern California, is one of the few lizards found in Santa Monica, which is generally too cold and too wet for most reptiles. They are harmless and, in fact, quite useful to people. Not only do they eat insects such as beetles, mosquitoes, and various types of grasshoppers, but they are probably the reason we do not suffer from Lyme disease in their range. When a tick latches onto a fence lizard, which they do as part of their life cycle, a protein in the lizard's blood kills the bacterium that causes Lyme disease.

Colors vary depending on location. They brumate, or go into a light hibernation, during the winter and breed in the spring.

The showdown is comparable to the showdown between Godzilla and Rodan.

Such a welcomed oasis from the news mire expelled on a daily basis. Yearning to enjoy more pleasant tidbits like this article. Thank you.