Unsafe Conditions at Santa Monica's Parking Garages Were Known Before Near-Deadly Carjacking, Murder, and Rape Attempt - And Still Nothing is Being Done to Address Them 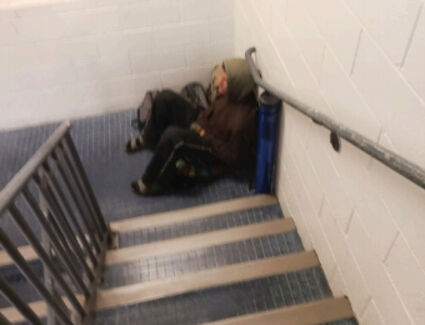 For 19 months prior to the rape attempt, carjacking, and violent assault in Santa Monica's Parking Structure 8, property owner John Alle had been sounding the alarm to public officials and Downtown Santa Monica, Inc. about unsafe conditions in the parking garages that line the Third Street Promenade. In emails to Kathleen Rawson, CEO of DTSM, to the city council, and to Henry Servin, Traffic and Parking Manager for the City of Santa Monica during this time period, Alle begged for help in solving a multitude of building maintenance and security issues.

According to Alle, who walks the alleys and parking garages frequently, individuals have been camping out in the garages, either in their cars or using the dumpster rooms, elevators, and stairwells as bedrooms. "The overnight addicts and predators leave behind their feces, pools of urine, vomit, uneaten food, needles, syringes and lighters," said Alle in a June 14 email to Servin. One night, the 3rd level of Garage 3 was taken over for a rave party. Those camping in the structure have started multiple fires in the dumpsters.

It does not help that entire floors of the garages are missing lights, and exit signs are missing or broken. Gang graffiti is spreading in the stairwells. Elevators aren't working. To top matters off, the pay turnstile in Garage 3 is broken, creating a long line of cars attempting to exit.

Alle says that not only did none of his concerns get addressed over the past year, but matters have gotten worse. In his June 14 email to Servin, Alle wrote, "The number of people setting up tents, bedding and sleeping bags, and taking over the garages has increased since I began documenting all this 19 months ago." With unfortunate prescience, Alle added, "We have a safety and security issue that is placing our citizens at risk."

Henry Servin, the manager of the parking garages, also declined to state why he has not addressed the many maintenance and safety issues in the garages. According to Alle, he has tried to contact Servin via email, phone, and in person for eight weeks. He has not received any kind of response.

Kevin Herrera, Senior Marketing and Communication Manager for DTSM, told us, "DTSM, Inc. is not responsible for the management of the parking structures. We have forwarded your inquiry to the appropriate contact at the City of Santa Monica." In fact, DTSM is responsible for cleaning up garage stairwells, lobbies, elevators and emptying trash cans in these areas. In addition, DTSM is funded by property owners on the Promenade and by taxpayers. Their job is to make sure the Promenade and downtown area are profitable for the businesses there and a source of pride to taxpaying residents. Even if they are not directly responsible for management of the garages, it is their duty to see that whoever is responsible maintains those garages to be fit for the public. Certainly, DTSM should do everything in their power to see that no part of the downtown becomes a haven for drug-addled criminals.

Oh, and no "appropriate contact at the City of Santa Monica" contacted us. 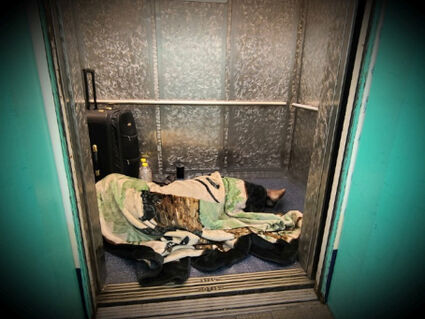 The elevators, dumpster rooms and stairwells have been taken over as residences for vagrants

Alle says "The only persons who have reached out and tried hard have been Police Chief Seabrooks, Lieutenant Rudy Flores and Lieutenant Robert D'Andrea." However, "their hands are tied due to restrictions and pressure placed on them by our City."

In a segment on Fox 11 News regarding the conditions at the garages, only Santa Monica Councilmember Phil Brock was willing to discuss the problems created for residents by our growing homeless, and often mentally unstable, population. He later added to us that the garages, the "front door" to our city "must be clean, sanitary, and safe and no, it cannot be used as housing for our homeless population." To do so "points to systemic neglect on the part of our city officials."

But the rest of our city officials, both elected and employed, have been completely silent.

THANK YOU FOR THIS ARTICLE! This is so shameful! This is so offensive to the taxpayers! THIS is so irresponsible of Santa Monica officials to not have a transparent line of communication for resolution of health and safety concerns that impact Property owners, Residents, Businesses and Visitors to our City! THESE are the TAX PAYERS that pay the salary of the staff responsible for services and COMMUNICATION. WE ALL NEED TO CONTINUE TO TRY TO HOLD THEM ACCOUNTABLE