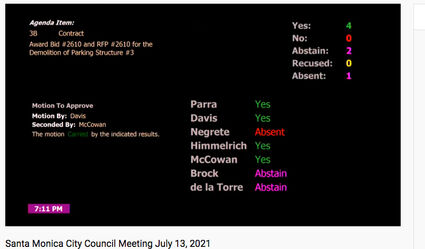 Vote on demolishing the parking structure. The newest councilmember was absent.

After hearing a brief history of the long journey to demolish Parking Structure 3 in downtown Santa Monica, the city council voted 4-3 to demolish the structure and replace it with affordable housing. The demolition will not take place until December 31, 2021 at the earliest and will take an estimated six months to complete. No plan has been approved, or even submitted, regarding the proposed affordable and supportive housing that is to replace the structure of 337 parking spaces.

To support the plan to demolish the structure, city staff presented photographs of the structure's decay, with exposed and broken rebar and cracked expansion joints. They also displayed a color-coded map of the occupancy rates of the various city parking structures on a "typical August day." Although some council members were astute enough to question what years constituted this typical August day, they failed to question whether cherry-picking one day out of two years of data was an adequate method of determining the parking structure's true average or even peak occupancy. And yes, one of the years used to determine the "typical" August day was 2020, during the height of the lockdown when many businesses were closed downtown and still reeling from the effects of the May 31 riot. Supposedly, the consulting company that prepared the map "took that into account," whatever that means.

Asking the most questions was Phil Brock. Among other pertinent facts, he wanted to know why the city planned to demolish the structure now, when the city has not even received requests for proposals for the affordable housing that will replace it. Staff agreed to put off demolishing the structure until after the Christmas season of 2021 in order to help struggling businesses. This seemed something of an admission that the Promenade and Downtown actually do need the parking structure.

One of the staff's limp arguments for demolishing the structure was that the demolition would cost less than repairing it. Demolition is estimated to be roughly $2.6 million and repairing the garage would cost an estimated $4.5 million. This, of course, is an absurd argument. The garage would make back the capital cost sunk into it for repair in parking revenue in far less years than it would take before it required significant new repairs. However, once the garage is demolished, it will never make money again. Instead, the city will be on the hook for funding and maintaining subsidized housing. 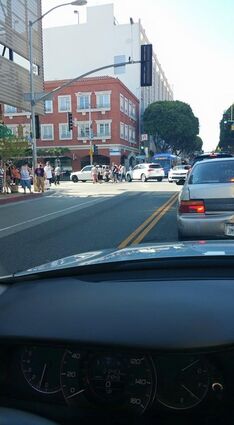 Regarding the funding, both staff and the mayor clearly anticipate receiving federal money arranged by U.S. Representative Ted Lieu. He's apparently earmarked $2 million for the cost to demo the parking structure and possibly more to help pay for the affordable housing. It appeared a mere insignificant detail that this would depend on the rest of Congress going along with Lieu's plans and voting to approve the spending bill.

The proposed affordable housing on the site will also contain "supportive housing," which is where officials plan to put the drug-using vagrants who shoplift at our city's stores.

But don't worry. It will all work out. People will decide to ride the train here instead of driving their cars. Locals will ride their bicycles to the Promenade, with their children and elderly parents between the handlebars. And the drug-addicted vagrants who've come here for the free handouts and soft crime laws will get the help they need, dry out, and become model citizens. Maybe they'll even shop at the Promenade!

I asked at the time the library was being designed why the City did not add low income housing on top. They had the property. They had the space. Still a good question.

Knocking down parking structures in a city that desperately needs MORE parking along with taking road space for bike lanes, and closing down portions of Main Street on weekends for dining in the street is all part of making it more difficult to own and drive a car in Santa Monica. The enviro-crazies and powers that be want you OUT of your car and on a bike or the bus. That's why this is happening. It's social engineering.