Students in SMMUSD to Eat for Free in Schools this Fall 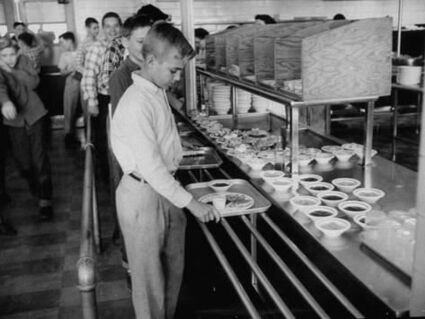 Students receiving school lunches in this classic photo taken around 1970.

Students in the Santa Monica-Malibu Unified School District will have the option to eat school meals for free in the upcoming school year, regardless of their family's income.

Flush with an unexpected budget surplus, California announced on Monday it will offer free school meals to all 6.2 million public school students this fall.

The undertaking will be the largest free student lunch program in the country, state officials said. SMMUSD officials have not yet commented on the free lunch program.

Many school districts, lawmakers, anti-hunger organizations and parents are applauding the new program as a pioneering way to prevent the stigma of accepting free lunches and feed more hungry children.

Under federal rules, a family of four must make less than $34,000 a year to qualify for free meals and $48,000 to qualify for reduced-price meals. The caps are based on federal poverty measures that don't take into account the high cost of living and taxes in California, school officials said.

About 60% of California students qualify, but experts say the number of children who need food assistance is much higher in a state with vast income inequality. Communities of color are disproportionately affected and immigrant communities are fearful of applying because of forms that ask intrusive questions about Social Security number and immigration status.

When the pandemic hit, it changed everything - including how school meals were served - and provided an impetus for the universal program, which had bipartisan, unanimous support.

After schools shut in March 2020, many transformed their parking lots into pickup sites, and federal funding allowed schools to offer meals to anyone.

Backed by over 200 organizations in a coalition called "School Meals for All," lawmakers pushed for funding in the state budget, seizing the momentum at a time when California is flush with cash. The $262 billion budget provides $54 million for the coming school year, supplementing funding from the Biden administration through June 2022. After that, California will spend $650 million annually.

If California is flush with extra cash, then how much sense does it make to spend that money giving free school meals to the children of millionaires? The children who really need free school meals already receive them. So, all the other children who will now be receiving free meals come from families that have the ability to pay and have been paying in previous years. This virtue-signaling stunt helps no one who really needs help. If the state is awash in cash, then WHY wasn't it put toward solving the homelessness problem that's overwhelming every California city? Those are people that actually DO need help. In addition, what happens to all those free meals for students whose parents can afford to pay when all the extra cash is spent and there are no federal stimulus funds next year, and the year after that, and the year after that? Will the state take food out of the mouths of these children? No. That's when new TAXES will be levied to continue feeding the non-needy students.