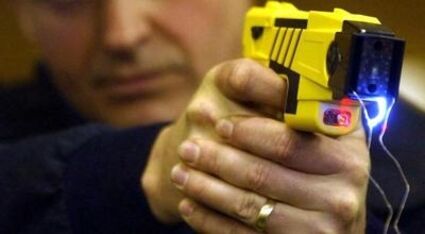 File photo of a policeman firing a taser gun.

Santa Monica police deployed a Taser to subdue a homeless man who allegedly stabbed another man at the beach last Sunday, authorities said.

The incident occurred at 6:35 p.m. on July 18 in the block of the beach, according to the Santa Monica Police Department (SMPD).

The victim told police officers he was stabbed in the back with an unknown object and provided the description of the suspect and where he was headed after the violent incident.

"Officers were then flagged down by other witnesses who described that the suspect was waving a sharp object at people," police said in a press release.

Officers found the suspect – later identified as a 32-year old homeless man -- a short distance away, police said. However, the suspect disobeyed the officers' commands and ran away from them.

"At one point, the suspect collided into a male and made a slashing motion at him, while holding the object," police said. "An officer then deployed his Taser... immediately immobilizing him, allowing officers to quickly take him into custody."

Timothy James Smith was arrested, charged with assault with a deadly weapon and resisting, obstructing and delaying arrest. He was transported to a local hospital for injuries he sustained during his fall, police said.

Anyone with additional information pertaining to this incident is strongly encouraged to contact Detective Nicole Murphy with the Criminal Investigations Division at 310-458-8941 or the Watch Commander (24 hours) at 310-458-8427.