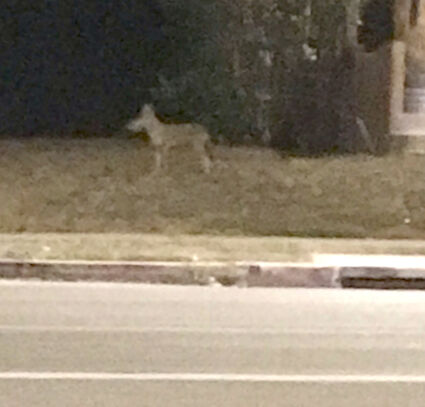 This Coyote was photographed from across busy Olympic Blvd and the corner of Camden Avenue, in West LA at 2:00 am Wednesday morning, when traffic is lightest.

West LA residents report that they have seen newly dead house cats killed by coyotes. Brazen coyotes have been seen in busy intersections such as Olympic and Sepulveda, which carry freeway levels of traffic. Residents report seeing corpses of cats across the fine trimmed lawns of West Los Angeles.

"Coyotes are hunting in our neighborhood again and are a threat to pets and children!" warns a poster that has appeared in the neighborhood.

Olympic is full of cars during the day, but at 2:00 am it is empty, even in West LA.

"When I was looking for the coyotes last night I saw two guys walking on the other side of Olympic," said the West LA resident. "I yelled across Olympic blvd that I was looking for a pair of coyotes. They yelled back that they had seen them and called 911 about the sighting. 911 said that there was nothing they could do. That it wasn't against the law. I guess they expected someone from animal control to come out at 2:00 am and capture the coyotes."

"About a month ago I saw flyers someone had posted on Kelton and Tennessee that coyotes were killing cats 🐈 in the neighborhood," said one West LA resident.

"One cat (a dead cat he saw on a lawn), looked like it had been alive recently. A woman in the neighborhood said she had heard a cat scream at about the time I saw the cat, which was 2 am Wednesday morning."

Coyotes are abundant southwards through Mexico and into Central America. The species is versatile, says Wikipedia, and "able to adapt to and expand into environments modified by humans. It is enlarging its range by moving into urban areas in the eastern U.S. and Canada." 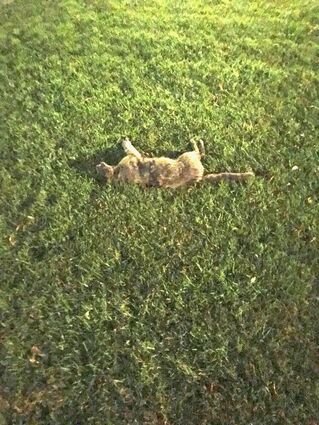 Male coyotes weigh 8 to 20 kg (18 to 44 lb) and the average female coyote weighs 7 to 18 kg (15 to 40 lb), according to Wikipedia. "Their fur color is predominantly light gray and red or fulvous interspersed with black and white, though it varies somewhat with geography. It is highly flexible in social organization, living either in a family unit or in loosely knit packs of unrelated individuals. Primarily carnivorous, its diet consists mainly of deer, rabbits, hares, rodents, birds, reptiles, amphibians, fish, and invertebrates, though it may also eat fruits and vegetables on occasion. Its characteristic vocalization is a howl made by solitary individuals. Humans are the coyote's greatest threat, followed by cougars and gray wolves."

Coyotes are native to Southern California. They are a part of the ecosystem and belong outdoors here. Cats are a nonnative species. They commonly kill native species, such as fence lizards and birds. Fence lizards are the reason this area does not suffer from Lyme Disease. An cat that is kept indoors will not be able to decimate native species and will be safe from native species like coyotes and hawks.