A Mobile Home Park, Hotel and Gas Station were all immolated in California's largest fire. 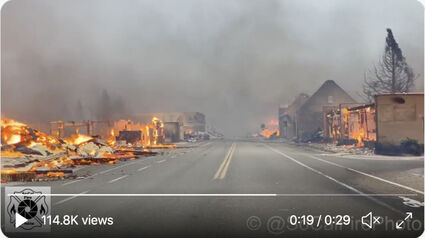 The Dixie Fire is California's largest fire at the moment.

Once again, an entire California town has been lost to a wildfire. The town of Greenville has about 1150 residents, a fraction the size of Paradise California, which burned to the ground in 2018. But its loss is no less tragic for the townsfolk, no doubt.

According to the AP, "the Dixie Fire tore through the Greenville on Wednesday evening, destroying businesses and homes as the sky was cast in an orange glow. A photographer on assignment for The Associated Press described seeing a gas station, hotel and bar burned to the ground."

"There isn't much left from Main St. North for about a mile," tweeted Bryan Clement on Wednesday just before midnight. "I can't say what it looks like past that but it's not going to be good. I got video from as far in as I felt safe. Will be working on it shortly. I'm so sorry for the community."

"We just entered Greenville on Hwy 89 This video was taken from Bidwell and Ann St. I'm so sorry for the town of Greenville. #DixieFire" tweeted NorCalFire.

Multiple structures were lost, including the Pineview Mobile Home park, reported various fire departments. 3000 men are currently working the fire, from departments all over the North of the Golden State.

California's largest fire, the Dixie Fire has been burning for the last three weeks. Intense winds fueled the fires advance into Greenville, which is in Plumas County. 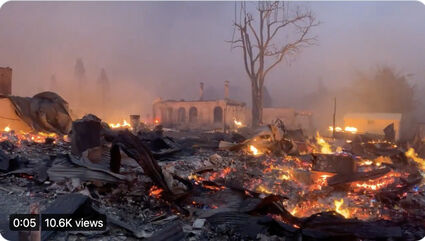 Greenville is a census-designated place (CDP) in Plumas County, California, United States, on the north-west side of Indian Valley. According to the United States Census Bureau, the CDP has a total area of 8.0 square miles (21 km2), all of it land. The population was 1,129 at the 2010 census, down from 1,160 at the 2000 census.

Paradise is located in Butte County, in the Sierra Nevada foothills above the northeastern Sacramento Valley. As of the 2010 census, the town population was 26,218. On November 8, 2018, a major wildfire, the Camp Fire, destroyed most of Paradise and much of the adjacent communities of Magalia, Butte Creek Canyon, and Concow.