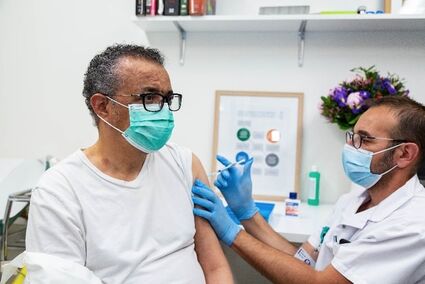 The Los Angeles County Health Department sent out a newsletter justifying their return to mandating masks three weeks ago. "We are now seeing a slowing down in the increase of cases," the LADPH wrote. They compared data from Los Angeles, where the number of new cases only increased 6.5% over the last week, to the rest of California, some of which does not have a mask mandate, where the number of new cases increased 20.2% over the same week.

The reason for the difference in increase in case rates may have nothing to do with masks. It may be that the rest of California is experiencing a surge that began in more dense and populated Los Angeles County - where the number of new cases increased well over 20% in the span of a week early in the surge. In fact, the county newsletter admits "there may be reasons beyond masking contributing to this difference."

In looking at data from the previous surge, which began in November and lasted into February, the number of new cases and new deaths per day is remarkably similar to the present surge. On November 17, during the upswing, there were 2,301 new cases on the same day there were 25 new deaths. Yesterday, August 10, also on the upswing, there were 2,622 new cases and 22 new deaths. In November, the county was still largely locked down, with no public gatherings allowed and no indoor dining. Masks were required outdoors as well as in. But the numbers are almost identical. Allowing indoor dining and removing masks outdoors does not appear to be worsening the county's numbers. Perhaps these measures never had to be instituted in the first place.

The number of new cases in the county reached a peak near January 7, with 19,719 new cases and 218 new deaths. Vaccinations at this point were still only available to the elderly and certain employment sectors. Yet the number of cases diminished with the predicted bell curve despite the fact only a small percent of the population had been vaccinated.

Today, the number of cases is rising despite the large percent of the population who have been vaccinated. Since many breakthrough infections have been recorded and it appears that vaccinated individuals may not know they have been infected, the vaccinated may be as much to blame for the spread of the Delta variant as the unvaccinated, who are more likely to realize they are sick and thus stay isolated.

In any case, the county's data does not support the idea that lockdowns slow the spread of the coronavirus, at least thus far. The number of new cases and new deaths now that most businesses are open and families are gathering is almost identical to when these activities were prohibited. 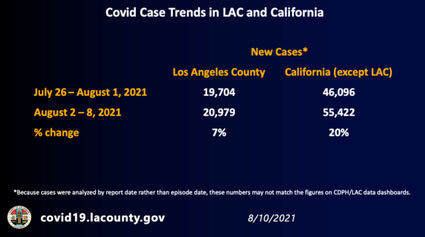 The effectiveness of masks cannot be measured by comparing LA County's data to other areas of the state as many more criteria than masks are involved in the comparison. It is clear from the data within the county itself, however, that outdoor masking had no effect whatsoever on slowing the spread of Covid-19. This aligns with scientific data which find almost no spread of Covid-19 outdoors.

It is doubtful cloth masks or nonmedical "surgical" masks made in China are effective against the Delta variant, which packs a larger load of virus particles in each breath than the original virus - and there is some doubt these nonmedical masks ever had much effectiveness against even that.

But mandating masks give our officials a way to look as though they are taking steps to mitigate a disease over which they actually have no control.