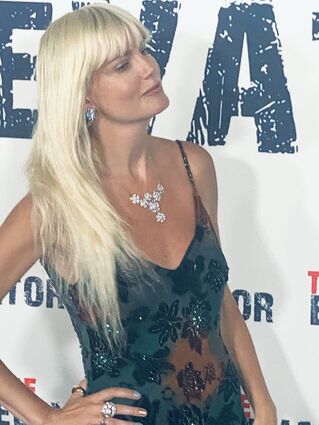 Eugenia Kuzmina star of The Elevator

Stunning actress and supermodel Eugenia Kuzmina walked the red carpet to celebrate the release of her new movie ‘The Elevator’ which she stars in with actor Eric Roberts and comedian/actor Matt Rife.

The red carpet event was held at the historical TLC Chinese Theater in Hollywood and Eugenia looked stunning in a Sue Wong designer gown and Margaret Rowe Couture Jewlery.

Eugenia proudly was accompanied by her nine year old daughter Veronika Block, who is also the daughter of legendary Hollywood Producer and Miramax CEO Bill Block, Eugenia’s husband of over 10 years.

Eugenia has spent years as a supermodel and cover girl so she is no stranger to style. She was the epitome of class and old Hollywood Style in her Sue Wong gown which draped as she walked the red carpet.

Designer Rowe was also on hand at the event to make sure the leading lady was vision of perfection. Rowe is also a Hollywood favorite having her jewels worn by the likes of JLO and Miley Cyrus! She was also Los Angeles Accessory Designer of The Year last year.

Daughter Veronika was also a sight to see on the red carpet in her sparkly dress as she held on tightly to her mother’s hand. Veronika wrote a song for the film last year when she was just eight years old! She is definitely a young talent to watch.

Eugenia has been busy over the past year performing as a stand up comedian at the acclaimed Las Vegas Show ‘One Night Only’ amongst SNL star Darrell Hammond, Jeremy Piven, John Di Domenico and Brit new comer Christine Peake. The sold out show was produced by BlackoutLA and peakprgroup and hosted by Comedian Jessica Winther. 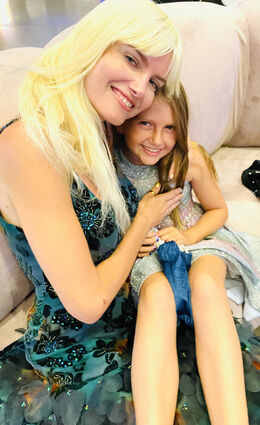 She has also recently performed her stand up in New York, Los Angeles and Chicago as well as shooting the latest Guy Ritchie movie. Plus she can be seen on the new Fox TV show ‘ I Can See Your Voice’

Eugenia will also be performing at the historical Roosevelt Hotel on August 19th at the ‘ A Dose Of Laughter Gala’ to support Holliblu, an App which supports nurses and healthcare workers. Comedians Max Amini, Darrell Hammond, John Di Domenico, Jimmy Shin, Greg Baldwin and host Christine Peake will be performing at the star studded event. Eugenia is set to appear as former first lady Melania Trump, which she has received amazing reviews for alongside Di Domenico’s famous Trump impersonation.

One thing is for sure, this model, actress, comedian, singer and doting mom is definitely the hardest working mom in Hollywood, and she looks great doing it!