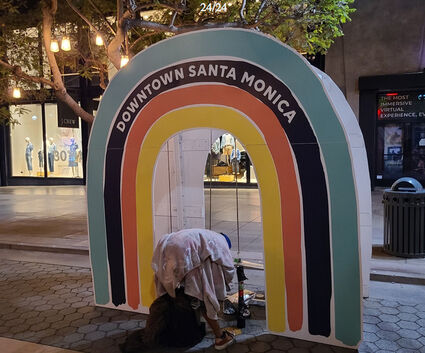 A woman, one of two, using the Promenade displays for personal sanitation

Vagrants are still being allowed to camp in the downtown Santa Monica parking garages, using the stairwells and elevators as bedrooms and bathrooms, according to downtown property owner John Alle. In the early morning hours of July 3, a drug-addled vagrant attempted to rape the female companion of a visitor attempting to retrieve his car from Parking Garage 8. When the male driver left his vehicle to rescue the woman from the vagrant, the vagrant stole his car and ran over the victim - more than once.

Since this incident, no progress appears to have been made in clearing the downtown garages of vagrants, their drug use, camping, or human waste. These garages are used mainly by visitors to Santa Monica and those patronizing the Promenade and downtown businesses.

Over the past two weekends, Alle requested help regarding broken lights, nonoperational exit gates, and openly intoxicated or insane behavior. No assistance was to be found regarding any of these problems.

On Friday, August 6, someone broke into the power/fuse box that controlled the lights in Garage 3 and shut down power to the building. With the entrance and exit gates out of operation and absolutely no lights on, no cars were able to use the garage. Instead, Alle witnessed 40 to 50 candles or flashlights, apparently being used by the vagrants who'd vandalized and shut off the power so that they could have the building to themselves. "There were no Safety Ambassadors, no other security, and no Police walking the area," Alle wrote in an email. A few nights earlier, vandals had broken into the same building's fire hose box.

Another incident, occuring on Sunday of the following weekend, is described by Alle:

"This evening at about 9:45 pm I finished dinner on the Promenade and walked back to my car on the 5th level of Parking Garage 3.

I encountered the person in black with bags (shown in the first photo), sitting against the parking ledge yelling obscenities, standing up and down, waving his hands. There were also a mom and her small daughter, and a set of parents with three small kids behind me, also walking to their cars.

The only elevator in use, closest to the to the alleyway, had a puddle of fresh urine in it, so they all followed me up the stairwell, and the father carried the stroller up 5 flights of stairs.

The mom and her small daughter were scared. None of us knew if the guy was armed with a knife or gun, or was high and would attack. The ceiling lights on the entire parking level were burned out, so at that hour it was dark and there was no outside light except car headlights.

The parents with the three kids quickly got into their car which was closer to the stairwell. The other mom and her daughter hesitated and I walked them to their car."

Following the departure of the mother and daughter, Alle attempted to get help from the police regarding the erratic, angry man accosting visitors to the garage. The 911 dispatcher told Alle "it was not a crime to sit in the garages and further explained the guy had 'freedom of speech' to say anything."

Alle did not bother telling the dispatcher about the three other vagrants who were then using the stairwells. 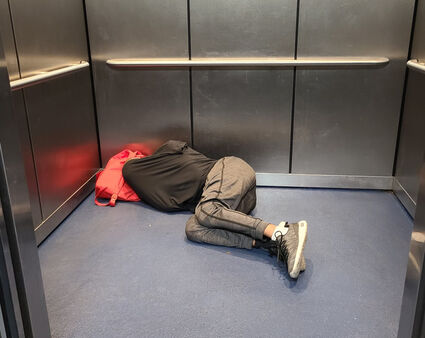 Vagrants are sleeping in the elevators on a regular basis. They also sleep in doorways, see photo below

Police do not have to arrest someone for a crime in order to take action to make an area safe for the public. Simply sending an officer to speak to the erratic and mentally unbalanced individual, and possibly assessing his need for mental health assistance, might have solved the problem. Simply showing up in a uniform would give assurance to the public - and the unbalanced individual - that order was going to be enforced.

If Santa Monica is serious about maintaining the Promenade as a regional draw for tourists and shoppers, then the city needs to get serious about creating a safe, healthy, and clean environment downtown and in the parking garages.

Disclaimer: John Alle, property owner on the Santa Monica Promenade, is currently a paying advertiser with the Santa Monica Observer Newspaper. However, we have published stories with content provided by Alle before he advertised and will do so after he completes advertising.