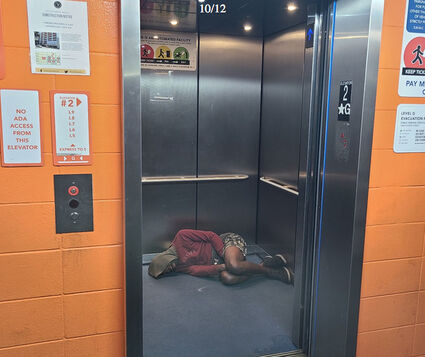 August 25, 2021 - In an email addressed to the Santa Monica City Council and the Downtown Santa Monica Inc business improvement district, Promenade property owner John Alle described a Monday afternoon series of incidents at Parking Garage 3. Alle has been documenting stories of vagrants camping out in areas of the garage, distributing their trash and human waste, and harassment of the public for over a year now. Even after a horrific attempt to rape a woman and murder her boyfriend by running over him committed by a vagrant in one of the downtown garages has not served to motivate DTSM or the city to take charge of the safety of the garages with improved maintenance and security. Given the city's unpopular decision to demolish Parking Garage 3, located on 4th Street between Arizona and Santa Monica Boulevard, Alle posited in his email that the city government maybe trying to create such an unsafe, unsavory situation at the garage that the public will change their mind about the demolition, scheduled after the first of the year.

This is what Alle describes happening on Monday afternoon:

"All the trouble was on the entry level of Garage 3.

"1) There was a guy inside the only available elevator, nearest the Promenade, lying on the ground with all his belongings who would not make room for anyone. During the 20 minutes I advised people to avoid the elevator, I saw 6 groups of families and couples, young and old, who were grossed out and scared. Some used the stairs, some returned to their cars. When the Safety Ambassador finally did arrive, he had trouble even opening the elevator door. The guy inside had done something to keep it shut.

"2) There were two guys smoking crack sitting at the handicap parking area near the 4th Street entry, where many elderly park. The City and Parking Services Manager will not cap off the electric outlet there and the vagrants use the area to charge their phones. The two people were arguing loudly over who could use the outlet and one walked over and pulled old wiring from the fuse box circled in red. One family returning to their vehicle from 4th Street was hassled by these guys. Another old couple drove in, saw what was happening, then backed up and drove out of the garage.

"3) There was another guy adjacent to the pay station urinating against the wall. No parking attendant or any type of Ambassador nearby.

"4) I walked down the alley to the ground floor of Garage 5 where City Parking Manager Henry Servin's office is located. But that elevator (orange color) was full of the guy shown in the photo. Shouldn't a parking garage manager walk the properties he supervises? It works that way in the private sector." 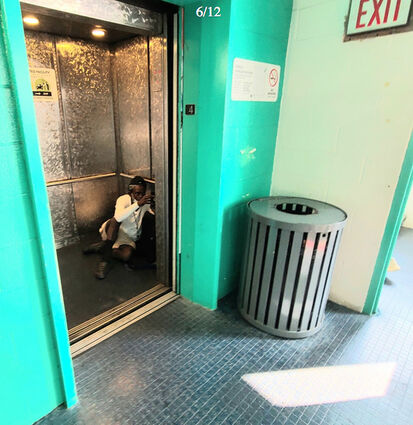 Another individual commandeering an elevator

John Alle's conclusion: "The general consensus among those who rely on and use Garage 3, is that the City is intentionally making things so bad shoppers and diners will not want to use it. The business and property owners, visitors, monthly parkers and residents are not fools. They see beyond all this. Many, and now most Stakeholders, tell me they believe the neglect is intentional, so that the voters will give up their opposition to demolition of Parking Garage 3. Thousands have signed the Petition to Save Parking Garage 3."

Alle asserts that the property and stakeholders at the Third Street Promenade are not receiving the $120,000 per month of security that they pay for.

The result, Alle says, is that "the Promenade is no longer even mentioned on most current internet or hard copy 'recommendations of places to visit' while in Santa Monica."

Alle has advertised in our newspaper an invitation to Mayor Sue Himmelrich to debate the idea of demolishing Parking Garage 3. Himmelrich has stated that it would not be advisable for her to debate given that Alle is part of a lawsuit against the city regarding the dangerous conditions and the inequitable decision to demolish the parking structure.