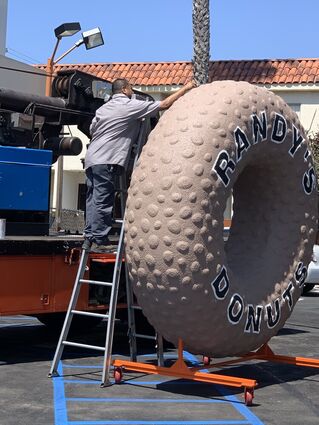 Mondo puts a final touch of paint on the Randy's Donuts sign.

Time to get excited people! Randy's donuts at 9th Street and Wilshire will be opening August 31, 2021, says Lawrence Carroll, their publicist.

"We only use the freshest ingredients. We throw out donuts that are older than an hour," says one of the perky kids who will soon be selling donuts.

Randy's Donuts is a bakery and landmark building in Inglewood, California, near Los Angeles International Airport, in a style that dates to a period in the early 20th century that saw a proliferation of programmatic architecture throughout Southern California. This style had its heyday from the mid-1920s to the mid-1930s. By the 1950s however, the trend of designing structures in the shape of the product sold there had changed to focus on signs rather than architecture itself. Randy's is represented by a giant doughnut on the roof of an otherwise ordinary drive-in that is a dedicated doughnut bakery. The building was designed by Henry J. Goodwin.

Most Randy's Donuts locations use a 32 1/5 ft (9.8 meters) -diameter donut version that straddles the building and is aimed at the intersection. In Roadside Giant by Brian and Sarah Butko, the Weintraubs climbed on top of the doughnut with a tape measure and confirmed this for the authors. 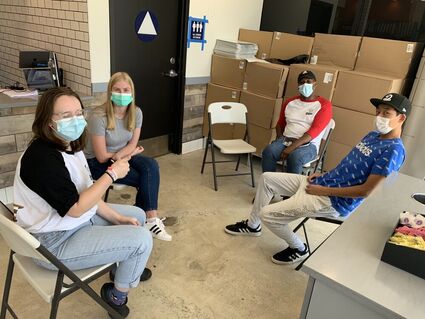 The shop's exterior has made numerous television and film appearances, including Arrested Development, Masked Rider, Entourage, The Golden Child, Get Shorty, Problem Child 2, Crocodile Dundee in Los Angeles, Californication, Earth Girls Are Easy, Iron Man 2, The Kissing Booth 3, Runaways, Dope, 2012 and the pilot episode of The Bernie Mac Show, as well as the music videos of the Red Hot Chili Peppers' "Californication", Justin Timberlake's "Can't Stop The Feeling!," Becky G's "Becky from the Block" and "Zooted" and Randy Newman's "I Love L.A."