Not everyone wants a vaccine. But working for the City of Santa Monica will pretty much require one, going forward. 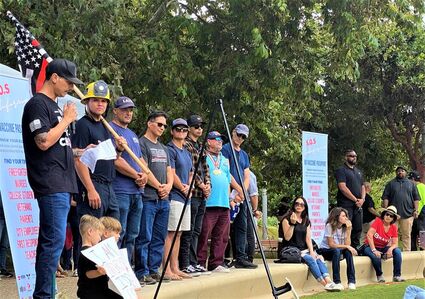 Firefighters lined up at a rally to proclaim that they would not vaccinate. Rally conducted in Tongva Park across from City Hall, on 8/22/21

Following in the footsteps of its neighbors, the Santa Monica City Council this week voted to require all city employees, volunteers and contractors to be fully vaccinated against COVID-19.

But the vote was not unanimous at Tuesday night's meeting.

Councilmember Lana Negrete abstained, stating that, though she is vaccinated, she respects people who don't believe in vaccines.

Voting against the measures was Councilmember Oscar de la Torre. He said he supports "people getting vaccinated" but he has a "problem with the mandate on political and humanistic grounds."

The remaining five councilmembers approved the mandate which states "absent legitimate medical or religious concerns, all city employees, volunteers, and contractors should be required to be fully vaccinated against COVID-19.

It remains unclear when city employees must report their vaccination status or get their shot.

Last week, the City of Los Angeles adopted a similar vaccine mandate. LA employees must have their first shot by September 7 and their second by October 10. No word yet on what will happen to those who refuse the mandate.