Photos and video capture Local bears foraging in or near an empty city, South Lake Tahoe. Burglary alarms are inevitably due to bears. 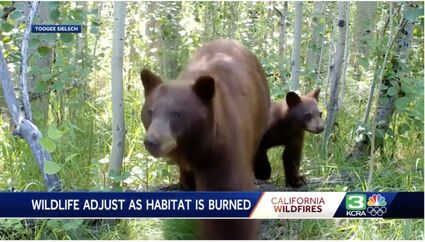 Who's smarter than the average bear?

South Lake Tahoe, a city of 22,000 people, has been evacuated due to the Caldor Fire. Caldor has burned 208,000 acres to the Southwest of Lake Tahoe, coming within three miles of the lake. Firefighters seem to have gotten the upper hand on the blaze during the last several days.

Local police report a number of burglary alarms every day in the deserted streets. They are almost always due to black bears, who break in to find food.

With the town and its casino's evacuated and empty, black bears have had the run of the town. A number of interesting photos hav emerged.

"Many garbage cans around South Lake Tahoe are bear-proof, but the ones that aren't, like at local gas stations and convenience stores, were ransacked by bears early Wednesday," said one local journalist, who stayed in the empty city.

"Local coyotes, deer, bears, raccoons and porcupines are fire adapted. They can make in on their own, even during a fire. They do not need our food," said one ranger from the Cal. Dept. of Fish and Wildlife. 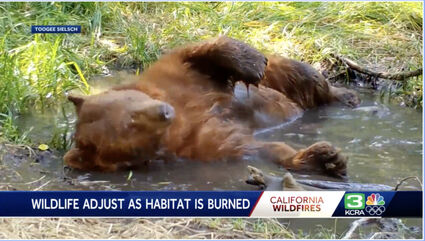 A black bear bathing in a stream.

Wildlife surveys last year show there are about 50 bears living within the city limits in South Lake Tahoe. On the California side of the Tahoe Basin alone, more than 500 black bears are believed to reside, many of them crossing from the forest into the city on a regular basis.

What do experts say you should do if you come into contact with a bear? Make eye contact but don't stare! Pick up small children, make yourself appear as large as possible, stay calm and quiet, back away and enjoy the experience from a safe distance. If the bear attempts to get away, do not block the bear's escape route!