"As she began to cut my clitoris, I began to fight and scream and wriggle under her, just looking for somebody to help me, somebody to come to my rescue." 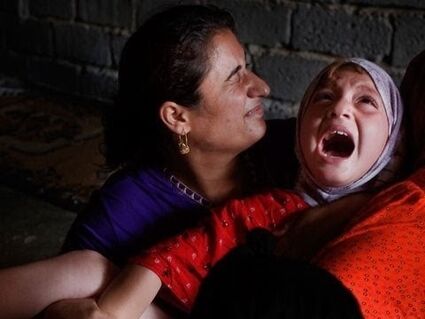 Children have a right to be free from harmful cultural practices that can negatively influence their life. We may placate ourselves by claiming that a child won't remember, however, modern science has confirmed that early life trauma leaves permanent life altering damage and that the earlier in life trauma is experienced, the more damaging the influence.

Children forced to undergo genital cutting will suffer lifelong physical damage, sexual damage as well as mental and emotional damage even if they do not acknowledge the harm.

While there are many forms of FGM, with different levels of harm it is important to acknowledge that all forms of genital cutting are harmful and unacceptable forms of child abuse. The moment a healthy child's genitals are pierced with a sharp object by adults who should know better, for whatever reason, a grave crime against that child, and against all humanity, has been committed regardless of cultural, religious or pseudo-medical beliefs.

The cutting of a child's genitals is tremendously painful. These are the most sensitive areas of our bodies and no adult in their right mind would volunteer to have this done to them, which is why it is children who are forced to suffer this crime. Victims have described excruciating torture that they have never experienced before or since.

When she was eleven years old Farima (name changed) was told by her stepmother to get dressed up for an event. In these cultures it is common to lie to the girls about where they are going. Rather then attend an exciting event, she was force to endure the worst experience of her life. After taking her into the forest her stepmother handed her over to a group of woman who overpowered her, stripped her naked, forced her legs apart and proceeded to mercilessly cut into her private areas with a razor-blade.

"Two or four of the women held me down. They spread my legs open and pinned me down, and then the woman who was the cutter, she sat on my chest," Farima recounts. "As she began to cut my clitoris, I began to fight and scream and wriggle under her, just looking for somebody to help me, somebody to come to my rescue."1

Children should be protected by their parents not handed over to psychos with knives who cut apart their private parts while sexually assaulting them and torturing them. We call them private for a reason.

Parents do not have special rights over their child, they have responsibilities to them. One of those basic and fundamental responsibilities is to raise our children to have all the body parts they were genetically born with.

Not only is this a grave human rights violation, this creates life long psychological and emotional harm.

New research at Harvard shows how the effects of early life trauma, better known as Adverse Childhood Experiences or ACEs affect the child for life even altering how a child's genetics are expressed. This makes sense evolutionary as a child born into a stressful and traumatic environment will develop defense mechanisms to deal with repeated trauma throughout life.

Children who experience ACE's will have a more exaggerated stress responses later in life. They are more likely to be overweight, depressed or unhealthy as well as suffer family and relationship difficulties.

Science is just now starting to unpack how early life trauma creates alterations in brain structure itself. ACEs has been associated with reduced hippocampal volume in adolescence, altered function of the Dorsal Anterior Cingulate, the Adult Anterior Cingulate Cortex and Caudate Nuclei. Each of these areas are important in memory formation and emotional processing.

"These findings tell us that there may be a 'sensitive period' in which stress is more likely to affect the development of the hippocampus, which is connected to learning, memory and mood," said lead author Kathryn L. Humphreys, assistant professor of psychology at Vanderbilt. "Given that the hippocampus undergoes rapid changes in the first years of life, the effects of stressful experiences during this period, even those the child doesn't remember, may be particularly important in understanding the development of this region of the brain."

It goes without saying that all children should have a right to grow up happy and loved with all their body parts they were born with. It is estimated that as FGM cutting cultures migrate into the world, unless we educate these cultures about the harm of FGM, it is likely that FGM will start to increase all over the world. As the Michigan case showed, FGM is already happening on American soil at an every increasing rate. The fact that only one case in which prosecution was attempted and thrown out since the law was enacted in 1996 proves it is going on unabated in our country.

ITS OPEN SEASON ON CHILDREN'S GENITALS IN THE LAND OF THE FREE, HOME OF THE BRAVE

Currently it is estimated that over 513,000 American girls are in danger of FGM or have even already been cut. As humans we must not justify and excuse harmful cultural practices that harm children especially if we want to continue to claim to love and care about our children.

Epigenetics and Child Development: How Children's Experiences Affect Their Genes 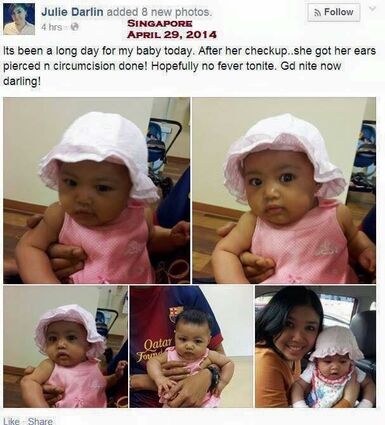 Julie Darlin posted this from Singapore, bragging about how her baby had her clitoris cut.