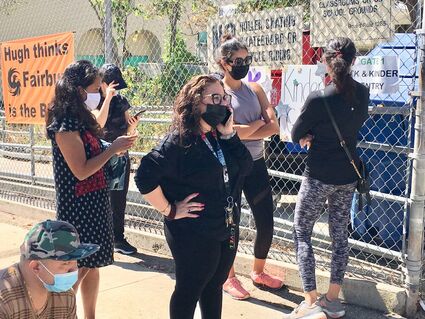 Parents standing outside the gate at Fairburn Elementary School.

The City of Malibu's petition to break up the Santa Monica-Malibu Unified School District into two separate districts cleared a major hurdle Saturday as a Los Angeles County Office of Education panel decided to move it to the next phase of the lengthy process.

At a virtual public hearing, the LACOE Committee on School District Organization voted 8-2 to proceed with regular review of the contentious petition. County officials said the vote doesn't necessarily represent an approval of the proposal.

As part of the review process, the committee and its staff will conduct a feasibility study and environmental analysis within 120 days of the next public hearing which slated for Nov. 17, said county officials.

Afterward, the committee will decide whether or not to submit the petition to the State Board of Education. If the state approves the petition, it will go back to voters for a final vote. County officials said the process is very lengthy and could take 3 to 5 years.

At Saturday's hearing – featuring more than 50 speakers – representatives from SMMUSD and local community argued that Malibu's separation petition would create "irreparable harm to both Santa Monica and Malibu, specifically in the areas of diversity, equity, educational programs and finances."

They brought up an LACOE report – released two weeks ago – which concluded that eight out of the nine criteria for separation set by the Committee have not been substantially met. They said "the analysis clearly illustrates that the proposed reorganization would have a substantial negative effect on the fiscal health of the remaining Santa Monica School District."

At the hearing, the city of Malibu argued that the SMMUSD "ignores and mistreats Malibu students and that the two cities are too geographically different to work as a single district." They also maintained the District is trying to "extract billions of dollars from Malibu as the price for local control over schools in Malibu's own community."

But SMMUSD Superintendent Ben Drati, told the panel he would support the break up "as long as the financial terms are fair and equitable and students are not harmed, regardless of which part of the district they attend school."

Drati also mentioned the LACOE report which "demonstrates the proposed petition would result in a catastrophic 21.52% revenue drop for a newly created SMUSD, and an immediate funding gap of $33,759 per student in Malibu compared with $9,964 per student in Santa Monica." 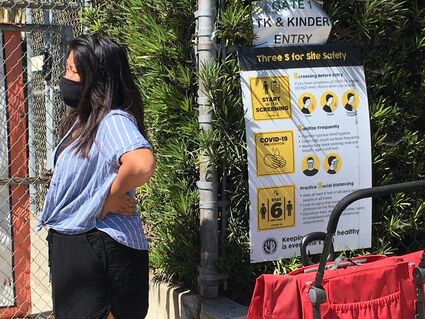 Covid rules outside the gate at Fairburn Elementary School.

He urged the panel to deny Malibu's petition and avoid a long and protracted battle that will drain "valuable time, energy and resources of SMMUSD staff and community members".

"Right now, we need to focus all of our attention and resources on the business of educating our students in a safe and sustainable way during this ongoing pandemic," he added.

They maintained SMMUSD was asking Malibu taxpayers to contribute $4 billion over the first 50 years, which is "far, far, far above what is required by the California Department of Education guidelines."