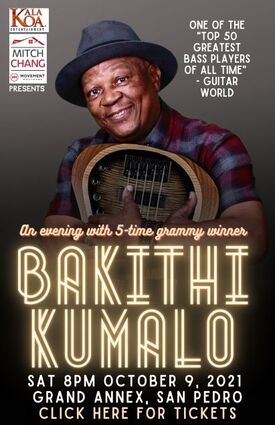 Spend an evening with five-time Grammy Award-winning master musician and storyteller Bakithi Kumalo, named as one of the top 50 greatest bass players of all time, having played with the likes of Paul Simon, Herbie Hancock, Gloria Estefan, Josh Groban, Susan Tedeschi Band and so many others. As a solo artist Kumalo has five albums to his credit and his latest recording "What You Hear Is What You See" will be released October 2021.

Experience the music that helped shape Paul Simon's "Graceland" into a modern masterpiece as Kumalo takes you on an amazing musical journey from South Africa to America and back.

Growing up amidst traditional African music and listening to popular American music on the radio, Kumalo fuses these elements with intuitive rhythmic and harmonic complexity.

Kumalo was born in the Soweto township of Johannesburg, surrounded by relatives who loved music and actively performed. Kumalo worked as a session musician in South Africa during the 1970s and early 1980s, eventually becoming a top session bassist and accompanying international performers during their South African tours.

Kumalo's musical career has been characterized by a series of serendipitous events, ranging from his debut gig as a precocious seven-year-old filling in for the bassist in his uncle's band to his enlistment into Paul Simon's group during the recording sessions of the pop star's landmark Graceland album in 1985.

Kumalo creates a singular electric fretless bass sound teeming with double stops that sound like human voices and the African grooves of his homeland, which has garnered him a stellar reputation as a sideman.

While Kumalo became a professional at an early age in his uncle's band, life in apartheid South Africa posed many challenges; so many, in fact, that Kumalo began to look for work outside the music field. However, a producer friend, Hendrick Lebone introduced him to Paul Simon, whose music he was largely unfamiliar with. Despite his nervousness in meeting the American pop star in a studio setting, Kumalo says Simon immediately gravitated to his bass style.

Kumalo traveled with Simon to New York to finish the sessions, and after the accompanying concert tour spent several years commuting between Soweto and New York City before permanently settling in the United States. Kumalo has toured regularly with Simon since then. He has also released several solo records, and continued to perform as a session and touring musician.

Grand Annex concert attendees will be required to show proof of vaccination or a negative 72-hour PCR or antigen test at the door. Facemasks will also be required.