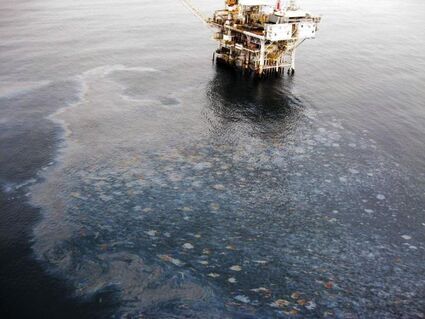 Ol slick is believed to have resulted from a pipeline leak.

The US Coast Guard responded to an oil spill 4 miles off the coast of Newport Beach, the Federal Agency reported on Saturday. The event interrupted an airshow over Newport Beach.

An oil slick just off OC Coastline is expected to come ashore at some point Saturday night, officials in Huntington Beach said at a press conference Saturday, 10/2/21. Authorities added that residents should expect beach closures and stay out of the water. The oil slick is believed to have resulted from a pipeline leak.

The press release from the US Coast Guard is below.

A unified command has been established to respond to an oil spill reported to be approximately 13 square miles in size, 3 miles off the coast of Newport Beach.

The unified command consists of Beta Offshore, the Coast Guard, California Department of Fish and Wildlife's Office of Spill Prevention and Response (CDFW-OSPR). Supporting agencies are the cities of Long Beach, Newport Beach, and Huntington Beach, and the Orange County Sheriff's Department.

The Coast Guard received an initial report of an oil sheen off the coast of Newport Beach Saturday at approximately 9:10 a.m. The Coast Guard and Huntington Beach Police Department have dispatched aircraft to access the situation.

CDFW-OSPR is monitoring for oiled wildlife. If anyone encounters oiled wildlife, do not approach. Call the Oiled Wildlife Care Network at 1-877-823-6926.

The cause of the spill, volume and type of oil are under investigation.