After Second Brentwood Murder in a Month, Calls to Disperse Vets Living in Tents on San Vicente 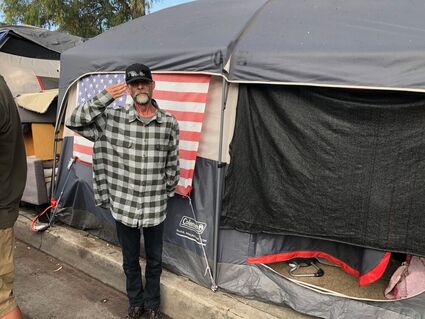 A homeless veteran living on San Vicente salutes. The man pictured above was not involved in any way with the events described in this article.

After the second killing of one homeless man by another at a homeless encampment on San Vicente on September 14th, local officials said they would redouble efforts to house the veterans elsewhere.

Neighbors in Brentwood who have always been less than thrilled about the row of tents on some of the world's most expensive real estate, were naturally disgusted by the violence. Some of them demanded that authorities do something about the violence that naturally ensues when drug and alcohol addicts live side by side in tents.

The identical tents are on San Vicente just north of Wilshire Blvd in West LA. Veterans who agree not to use drugs or alcohol are issued tents to inhabit on the VA property itself. But those who will not take the pledge must pitch their tents just off the grounds, on San Vicente sidewalk. 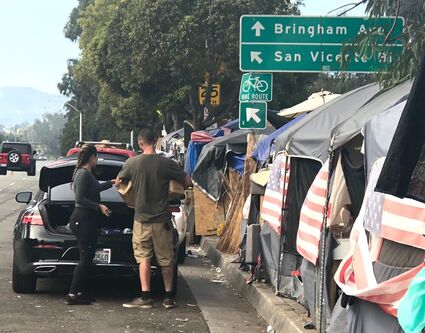 Approximately 100 homeless vets live at the encampment on the other side of the Western fence of the VA. Most receive or have received services at the Westwood VA, including both the victim and suspect in last month's stabbing

"I kind of beat myself up about it last night," said Lieutenant William Kitchin of the Sheriff's Homeless Outreach Services Team the day after the killing. Kitchin told KCRW that Sandoval wasn't threatening to hurt himself or anyone else, and was asleep by the time the deputies left. "It's an unfortunate incident that I don't think could've been prevented or foreseen."

The VA in Westwood goes back more than 100 years, to before World War I. In the 1890's, the Government allotted the land to house homeless veterans. But the neighbors protested in the 1970's, and no veterans were housed there until 2014.