Once residents have been matched to the services they need, the tents will be cleared and the sidewalk sanitized 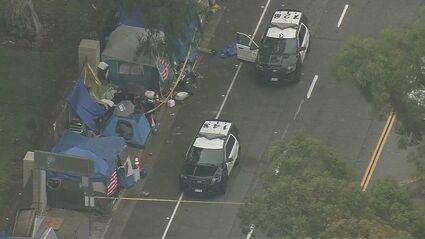 The Los Angeles County Sheriff is the only entity in the area willing and able to remove homeless encampments, says Michelle Bisnoff, Chair of the Brentwood Community Council, in a social media post. Currently, the sheriff's Homeless Outreach Services Team (HOST) is working to clear the encampment of veterans that have occupied the sidewalk on San Vicente outside the Veterans Administration for some time. Two murders have occurred in the tent encampment in a month.

Under current laws and "leadership," Bisnoff notes, "The Sheriff is the ONLY ENTITY who can operate quickly, effectively and independently of the County Supervisors RIGHT NOW." The Brentwood Council had been forced to call in the sheriff independently as Los Angeles County Supervisor Kuehl, in whose district the problem lies, "refused to call them in." Bisnoff remarks, "She is not running for re-election."

The sheriff does not roust the homeless and coldly send them on their way. The process is handled in three phases.

Phase 1: Social services come in to meet with the encampment residents and inform them the camp will be disbanded.

Phase 2: A full assessment is performed on each individual in the camp to match them with appropriate options.

Phase 3: A public notice is posted 14 days prior to the removal of the encampment. Everyone must be gone from the camp by the date posted. On the date, the debris will be removed and the sidewalk sanitized. 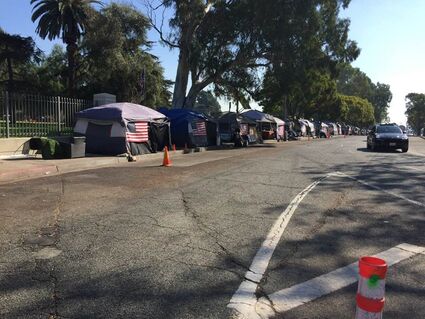 Tents fully occupying the San Vicente sidewalk outside the VA

According to Bisnoff, the Veterans Administration has housing available for every veteran homeless on the San Vicente sidewalk. At the time of her October 7 post, there was 35% vacancy in the VA housing. However, the VA has rules for use of their housing: no alcohol or drugs, curfews are imposed, and Covid testing required. In addition to housing, a shuttle bus will transport homeless vets to the various services on the VA campus they may need.

The sheriff's department (not LAPD) is providing multiple daily patrols of the encampment area, according to Bisnoff. But since they cannot monitor the area at all times, she urges residents to report crimes and potential crimes they may witness to law enforcement. The LAPD Senior Lead Officer for Brentwood is Matt Kirk, and he can be reached at [email protected]