Ginger Cats Rule: Why Everyone From Winston Churchill to Leif Erickson and Hogwarts Adored Orange Kitties

Did you know that Orange cats often have dark brown freckles on their ears, noses, lips, and even the roofs of their mouths? 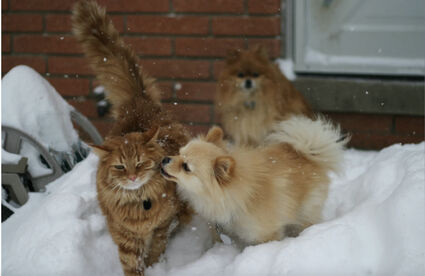 Orange cats often have dark brown freckles on their ears, noses, lips, and even the roofs of their mouths!

Last week, in honor of the beginning of Halloween month, we featured a few fascinating facts about the flashy black felines that have become icons of the holiday.

This week, we're dishing out a sweet celebration of Salem and Bastet's counterparts -- orange, or ginger, cats.

While they may have less of an association with Hallow's Eve, ginger kitties fit right in amongst a pumpkin patch, and their striped leggings recall cartoon and film witches, from the Wicked Witch of the West to J.K. Rowling's Hogwarts. So, here are some interesting tidbits about ginger kitties.

1. Garfield isn't too far off the mark. For one thing, 70% of ginger cats are male -- the gene for ginger pigmentation will be overwritten in the presence of another, more dominant gene. And since the gene is carried on the X chromosome, XY male cats only need one copy to become gingers, whereas females would need two copies.

Furthermore, those stripes are a necessity: there are no solid orange cats (though there are solid peachy creamsicle ones.) And finally, Garfield's fondness for lasagna and his portly constitution match up well with your typical orange male cat. The Helpful Vancouver Vet on Youtube notes that many of his "food-obsessed" patients are marmalades.

Our ginger males are known for getting bigger than their grey, white or black counterparts, and may have a greater predisposition to becoming overweight if their intake is not monitored. One thing that distinguishes Garfield from the typical orange tabby? IQ. Whilst Jim Davis' creation has a certain savant air about him, the collective Internet has determined that "all orange cats share one brain cell." Google it for some cute and mildly disturbing memes.

2. If you have a thing for ginger cats, you're in good company. British Prime Minister Winston Churchill purportedly adored orange cats, especially his own furbaby, Jock. In 1965, when Churchill passed, he left his home at Chartwell to the British public, on condition that an orange cat named Jock, with white bib and socks, would always reside there.

So far there have been seven "Jocks of Chartwell" and counting -- a veritable dynasty! According to his page on the UK's National Trust website, the current Jock VII was adopted from a shelter in May 2020 and has since "developed a mischievous character. His favourite pastimes are investigating what the gardeners are up to and trying to persuade people to give him snacks."

Beyond Churchill, rumor has it that the Viking explorers also favored orange cats on their ships, for their fiery appearance and supposed exceptional talent as mousers. In reality, there is little evidence that the Vikings preferred gingers. But Halloween is, after all, the occasion to entertain mythology and superstition! If you want to believe that the likes of Leif Erikson brought the ancestors of your little Cheddar to North American shores, go right ahead. 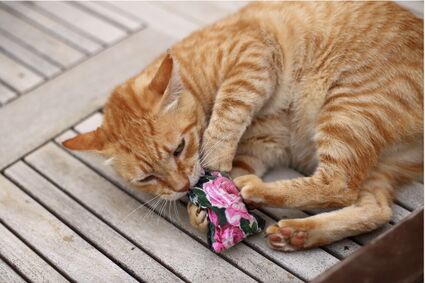 Rubio the cat plays with a bag of Valerian, more potent than catnip but also stinkier.

The possibilities are endless. And so is the love and warmth you'll feel from the gentle weight of a rescued or adopted kitty's head in your lap, preventing you from reaching your work. So if you are ready to make the commitment, take a flying broomstick ride to your local shelter and pick up a ginger cat -- or a black cat, or a dynamic duo for Halloween and all seasons -- today!