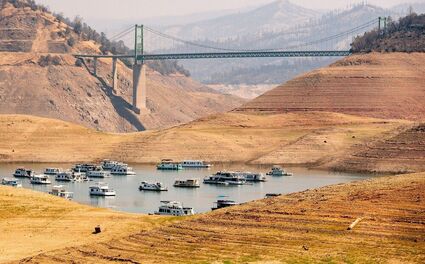 Lake Oroville on September 13. In the last wet year, the dam overflowed. Previous to that year, you could walk at the bottom of the reservoir. The state hasn't approved a new water storage project in decades.

And that is only the negative effects that Wood Environment and Infrastructure Solutions, the city's environmental consultant, couldn't help admitting to.

The admitted impacts from the Environmental Impact Report 6th Cycle 2021-2029 Housing Element Update include the following:

- Emissions from the continuous construction over 8 years of nearly 9,000 housing units will "substantially exceed thresholds." Wood characterizes its own conclusion as "conservative" that the impact will be "significant and unavoidable."

- Historical resources would be damaged or destroyed even using existing state and local regulations. Impact significant and unavoidable.

- New fire protection facilities would be necessary to support the additional housing, and no funding exists to construct such structures, which in themselves would have significant environmental impacts. Significant and unavoidable impact.

- Increased demand for parks and recreational facilities would require construction of more, which could have adverse physical effects on the environment. Impact significant and unavoidable.

- Increased demand for water supply will delay or inhibit the city's ability to achieve water self-sufficiency by 2023, a "potentially significant impact."

- The city's Vehicle Miles Traveled threshold would be exceeded. Impact significant and unavoidable.

Those are the impacts the consultant would admit to. However, there is room to dispute several key areas where Wood projected small or no impact.

- Noise. Wood claims "the operation of new residential developments would not result in a substantial permanent increase in ambient noise levels in the city." Do you believe that? Neither do I.

- Police. Supposedly the addition of some 10,000-plus additional people in Santa Monica would not exceed "city service standards." How on earth is that possible? More calls to the police would be made, more police presence would be required.

- Wastewater. Wood realizes additional facilities would need to be constructed to handle the additional waste from the increased population. The consultant is vague regarding funding for such new construction. A "Public Infrastructure Financing Program" will handle that. Do you smell new taxes?

And, finally, the item that is the least reasonable to wave off. Anyone who has lived in California for at least a few years knows the biggest limiting factor for all development: water.

To the consultant's credit, Wood admist new water facilities would need to be constructed to handle the increased demand for water (and admit current residents would have to help pay for it), but the consultant waves aside any other significance to this demand. Their perception of water availability appears to be limited to the city boundaries, and they do not consider possible restrictions on water supplies the city has heretofore been able to purchase from outside the city. They also appear to have amnesia (or only moved to California during the last 12 months) and don't recall water rationing during the region's frequent droughts. If current residents have to ration their water because the area does not have enough, then how could you possibly add an additional 8,895 more households to that demand? The issue goes far beyond the inability of the city to meet its sustainability goals. There may very well simply Not. Be. Enough. Water. 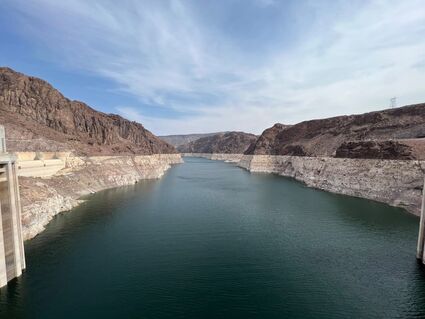 Hoover Dam on October 6. It is easy to mark the usual water line compared to today.

A frequent theme of the EIR is the clash between various demands by the State of California. The state's command to build more housing conflicts with the state's demand to stay under certain emissions levels or vehicle miles traveled thresholds. But hanging over the whole is the failure of the state to construct any new water projects over the past several decades. California cannot reasonably expect to add 1.34 million more households to its southern region without providing more water.