A man convicted of tying up a family and threatening to shoot them was released early because he also received stolen property, a nonviolent crime 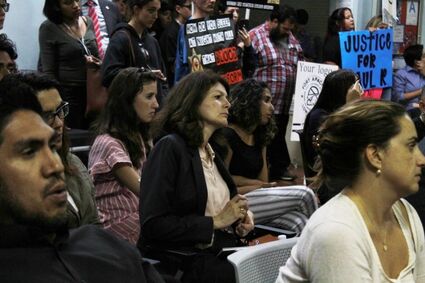 Diana Teran listening at a Town Hall in her capacity as the Public Defender's Law Enforcement Accountability Advisor, the person who holds police and law enforcement accountable. That is, the opposite of someone who holds criminals accountable.

Los Angeles District Attorney George Gascón's focus is not on prosecuting crimes, but on resentencing defendants who were convicted, sentenced and had their appeals denied, sometimes decades ago. Even more disturbing is that the Los Angeles County public defender's office is writing some of these resentencing motions for prosecutors to file, which deliberately omit or, at best, gloss over adverse controlling case law. All this is happening under the supervision of a deputy public defender "on loan" to the district attorney's office.

The genesis of this obvious conflict-of-interest came on Dec. 7, 2020, when Gascón issued Special Directive 20-14. It stated "this Office will reevaluate and consider for resentencing people who have already served 15 years in prison." He simultaneously issued policies that forbid prosecutors to charge gang or gun enhancements, prior strike convictions, or special circumstance allegations in applicable murder prosecutions. Gascón's directive stated, "the ultimate goal shall be to review and remediate every sentence that does not comport with the new Sentencing, Enhancement and Juvenile Policies. Specifically, this Office commits to an expedited review of the following categories of cases, which are themselves a subset of a universe of 20,000-30,000 cases."

Gascón's policy conflicts with the California Constitution. It holds that, "Victims of crime are entitled to finality in their criminal cases. ... [T]he ongoing threat that the sentences of criminal wrongdoers will be reduced, prolong the suffering of crime victims for many years after the crimes themselves have been perpetrated."

Yet, Gascón has used deputy public defenders and loopholes to undermine this constitutional mandate. Resentencing under Gascón's administration means that convicted defendants have their sentences redone, resulting in a lesser sentence and an earlier release date. Take for instance Proposition 36 resentencing. Prop. 36 was enacted to limit strike prior allegations to violent or serious crimes. However, an interpretation of the law allows judges to reduce the sentence of defendants who were convicted of violent or serious crimes if they were also convicted of nonviolent or serious crimes - so-called "mixed-count" cases. Based on the individualized facts of each case, prosecutors were permitted to argue against this loophole and oppose resentencing, because of the absurd result that a defendant would be given a break because they were convicted of additional offenses. That was the case before Gascón took office.

On taking power, Gascón seized on this loophole to resentence these types of cases. In fact, within days of Gascón being sworn in, Interim Chief Deputy Joseph Iniguez, who had no prior management and minimal felony experience, ordered prosecutors to concede on existing mixed-count cases despite having been provided information as to each defendant's dangerousness.

One of the cases affected by this blanket policy was People v. Williams. In 2000, Williams was convicted of residential burglary and false imprisonment by violence. Gun allegations and his nine prior residential burglary strike allegations were found true. Williams was also convicted on an unrelated count of receiving stolen property which is how Prop. 36 came into play. Using this Prop. 36 loophole, the defense was able to ask the court to resentence Williams.

The facts of the case are frightening: Williams, a 6'8" tall man, broke into the victims house and ordered the husband and wife upstairs. He bound their ankles and wrists with torn bed sheets, shoelaces and belts. He gagged them with socks in their mouths. As he pointed the gun at them, he stated, "this might look small to you, but I'm very deadly accurate with it." Fortunately, the victims managed to escape, retrieve a gun and shoot at the defendant through their bedroom door while on the line with 9-1-1. Williams was convicted and sentenced to 100 years to life. Because of Gascón's policy, the prosecutor was ordered to concede "dangerousness." Although the victims appeared and objected, the defendant was resentenced to 18 years, eight months, given credit for time served and ordered to be released from prison on Post Release Community Supervision. On Sept. 20, 2021 it was learned that the defendant was actually released with no supervision or assistance. The victims were not even given the protection of a criminal protective order. They and the community are now endangered by Williams' release.

In 2006, just a few years after her federal bank robbery conviction, Kimberly Carter shot and killed her boyfriend, Harry Phillips. She pleaded no contest to voluntary manslaughter. She also admitted that she used a firearm in the commission of the crime and had a prior strike conviction from 2002 for the bank robbery. She was sentenced to 27 years in prison. In 2020, the court denied a motion to resentence the defendant. On July 15, 2021, Teran filed a motion to resentence the defendant. The case is next in court on Nov. 8, 2021, for a resentencing hearing.

Penal Code Section 1170(d) provides statutory authority for resentencing prisoners based upon exceptional conduct. These motions, however, can only be made by the California Department of Corrections and Rehabilitation or the prosecutor. The law does not allow defense attorneys to make the motion. Yet, defense attorneys are now drafting motions for prosecutors to file on their behalf.

There are many other examples of resentencing under Prop. 36 and exceptional conduct subject to Gascón's blanket policy which are violating victims' rights and endangering community safety. 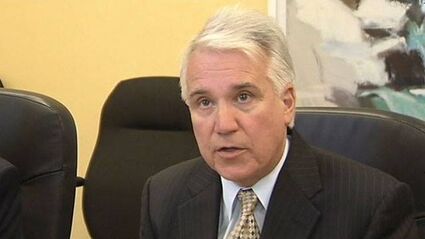 George Gascon, our District Attorney, for what that's worth

Governor Gavin Newsom's 2021-2022 budget allocated money for a Resentencing Pilot Program giving financial incentives to district attorneys' offices to remedy unjust sentences. While this may be justified in individual cases, Gascón's blanket policy seems to be directing that prosecutors request resentencing for anyone who has already served 15 years in prison. Of course, having a supervisor who is employed by the public defender's office and other deputy public defenders draft motions for prosecutors to file will most certainly help minimize the workload of prosecutors in the district attorney office's Resentencing Unit.

The public deserves to have an elected prosecutor who upholds his oath to follow the laws and protect community safety. Gascón, however, is expanding his effort to resentence 20,000-30,000 convicted felons who have already served 15 years in prison, releasing dangerous criminals, and endangering our communities.

Kathy Cady began her career as a prosecutor in 1989 and retired in 2019. She is one of several former prosecutors who are providing pro bono assistance to crime victims in response to Gascón's policies.