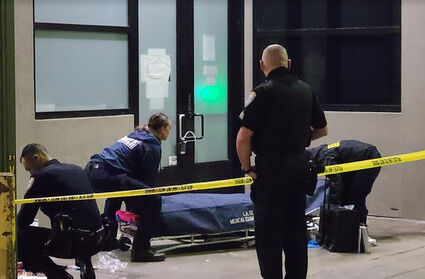 10.24.21: At approximately 6:20 am Sunday morning, a dead body was removed from the alley behind 1423 Third Street Promenade. Police set up yellow tape while two women from the Los Angeles County Coroner's Office wrapped the body and carted it away. The process was swift.

The dead body was near Parking Garage 6 and the Downtown Santa Monica Inc. Ambassador office. Lieutenant Rudy Flores of the Santa Monica Police released this statement:

"This morning, October 24, 2021 at about 4:55 AM, 9-1-1 operators received a call regarding an unresponsive male, lying in the 1400 block of court 2, who appeared not to be breathing. Santa Monica Fire and Police Department personnel immediately responded. Fire pronounced the male deceased. There is no evidence of foul play. Coroner took possession of the decedent, who did appear to be unhoused." 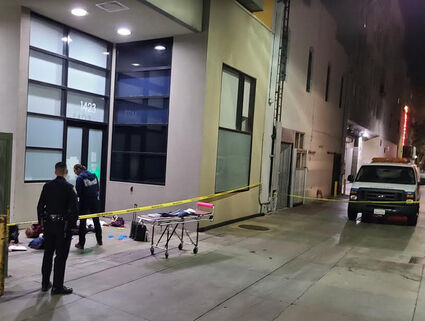 Alley between Second Street and the Third Street Promenade

The downtown parking garages have become homes for vagrants, who use the stairwells, elevators and dumpster rooms as makeshift homes. Drug use is rampant, along with fires to cook food and drugs, some of which become structure fires requiring Fire Department extinguishment. An elevator was destroyed a few weeks ago. City officials are aware of old equipment left in the garages that are being used to illegally cook, but do not remove the dangerous equipment. DTSM chief Kathleen Rawson has told property owners that she believes the old stoves are being used by the homeless to make scented candles for sale.

While the dead body was being prepared for removal, a homeless couple was having sex in the nearby garage, according to an eyewitness. On the Promenade itself, people were sleeping in tents, with at least one tent having an open flame inside. Video taken by the witness show Promenade workers driving cleaning trucks right past vagrants and their fires.

SMPD could not say how many homeless die in Santa Monica every year.

We are allowing our Fellow Human beings to Commit Slow Suicide Its so easy for the Bureaucrats to always say This is Unacceptable... But none are accountable or take responsibility. Accountability/ is Required From all Parties involved... Homeless Clients no willing to Seek treatment, Public Falling into the short sighted feel good trap of Helping the Homeless by providing unencumbered services with out reciprocity. It takes Effort and Commitment from all... Its hard work and no one seems willing to do it or take responsibility So Sad

I called SMPD this morning because a homeless man behind one of my buildings was emptying all the trash bins, screaming, threatening anyone he saw and making lewd comments and gestures towards women. It was a very disturbing situation. When a patrol car finally arrived I was told nothing could be done because the individual was not on private property and had 'rights'. I was trying to clean up the trash and broken glass in front of my tenants garages but was also told to stay out of the alley in the hopes the homeless man would eventually leave. How do you explain to residents to stay in their homes and not access their vehicles because the city refuses to protect them? This is not a SMPD issue it is a leadership and policy issue associated with the City Council.