It's Official: Elon Musk Likes and Supports Boobies. And so does Mark Zuckerberg, Turns Out

Cryptic Friday night tweets from the man who moves markets. Was he referring to #SHIB, #dogecoin, or some other Crypto currency? 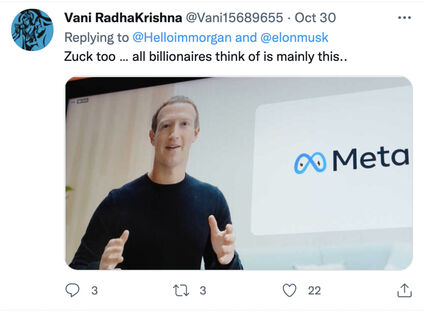 Turns out Facebook's Mark Zuckerberg also likes and supports boobies. Has anyone looked carefully at the new "Meta" logo?

The man who can move markets, Elon Musk, agrees that he "likes and supports Boobies." No, I'm not really sure what this means either. And it doesn't appear to have anything to do with either Dogecoin or a different crypto currency called Shiba Inu. Guys, could you let us in on the joke? 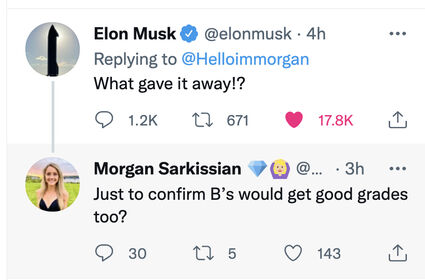 A woman named Morgan Sarkissian, who describes herself as an #NFT and Crypto investor, posted a tweet that "Elon Musk Likes and Supports Boobies." Musk tweeted back, "what gave it away?"

Sarkissian then tweeted, "Just to confirm B's would get good grades too?" And no, none of this makes much sense to me. But it's probably about crypto-currencies.

Musk recently moved crypto markets by tweeting about a crypto currency called Shiba Ainu. Partly after the dog breed, but more probably after Dogecoin. Musk has been married twice. He recently broke up with Grimes, a pop music star with whom he shares a child. Musk reports that the two are still friends.

Turns out Facebook's Mark Zuckerberg also likes and supports boobies. Has anyone looked carefully at the new "Meta" logo? See photo below.