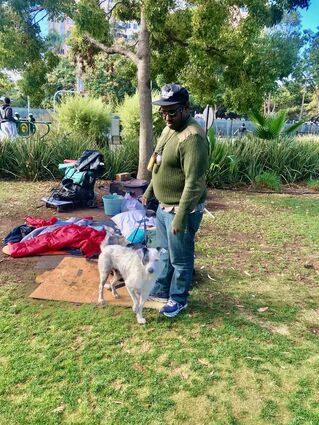 A homeless man and his dog in Reed Park.

Many homeless people hit the streets along with their pets. Others acquire pets when they are homeless. The animals seemingly don't discriminate on the basis of housing. They are often perfectly happy to live outdoors. But why would people experiencing homelessness want the burden of a pet?

Homeless pet owners use their pets to facilitate socialization, says Wikipedia. The pets get their owners out to local vet clinics and parks where they interact with other pet owners. Many homeless pet owners regard their pet with a high degree of attachment and report lower levels of loneliness with pet ownership.

Several studies have concluded that homeless people attribute their pet with saving their life, getting them off of drugs or alcohol; one researcher noted that many dog owners reported their dogs knew when they were sad or emotional, an example of the 'empathetic experience" of a human-pet connection.

Homeless people will choose their pet over housing or food. Leslie Irvine argues pet ownership prompts many to act responsibly, with many making a deliberate choice not to drink or use drugs, and to avoid contact with substance abusers or those involved in any criminal activity for fear of being separated from their pet. Additionally, many refuse housing in shelters if their pet is not allowed to stay with them.

Homeless pet owners will not sleep in shelters that do not allow pets, they will pass on the opportunity for housing if they cannot take their pet, and they will sacrifice their meal if food is limited.

The role of caregiving to their pet is constructed as their primary reason for being in life. The pet is dependent on them for food and care and this gives the owner a sense of responsibility and a positive self-image and self-worth. 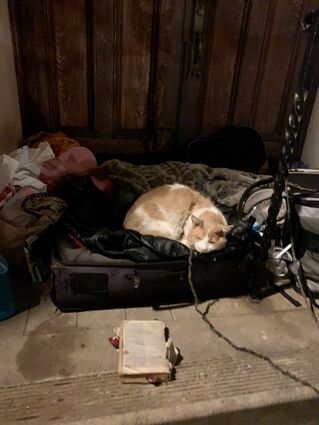 A cat guards his owner as they sleep near a church in Santa Monica.

"Companion animals provide unconditional love, friendship, a sense of structure and responsibility for their homeless caretakers, increasing both of their chances for survival," said Tom Bagamane, founder and CEO of The Giving Spirit, noting that an estimated 10 percent of homeless people in the U.S. have pets.

The charity is giving away 1,200 Companion Animals kits in five days, "to help sustain and enhance two lives with one loving gift," Bagamane said.