By Tyler Flynn
Wengler Center for the Arts at Pepperdine 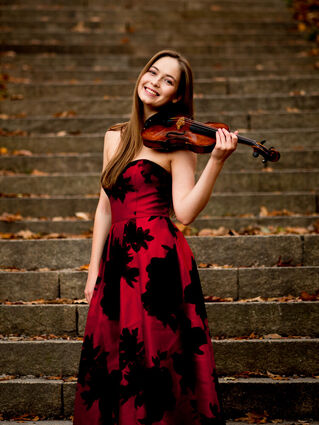 Violinist Geneva Lewis, accompanied by pianist Marisa Gupta, comes to Pepperdine University's Raitt Recital Hall at 2 p.m. on Sunday, December 5, 2021 as the first performer of the Recital Series for the 2021–2022 season.

While Lewis' claim to chamber music fame came early on as a member of the renowned Lewis Family Trio with her siblings Nathan (piano) and Rochelle (cello), she has since gone on to become the violinist of the Callisto Trio, Artist-in-Residence at the Da Camera Society in Los Angeles. Callisto was the recipient of the Bronze Medal at the Fischoff National Chamber Music Competition (senior division) as the youngest group to ever compete in the finals. In fall 2019, they were invited on the Masters on Tour series of the International Holland Music Sessions and performed at the celebrated Het Concertgebouw Amsterdam.

New Zealand-born violinist Geneva Lewis has forged a reputation as a musician of consummate artistry whose performances speak from and to the heart. Lewis is the recipient of a 2021 Avery Fisher Career Grant and winner of the Grand Prize at the 2020 Concert Artists Guild Victor Elmaleh Competition. Other recent accolades include being named a Finalist at the 2018 Naumburg Competition and a Performance Today Young Artist in Residence.

An advocate of community engagement and music education, Lewis was selected for the New England Conservatory's Community Performances and Partnerships Program's Ensemble Fellowship, through which her string quartet created interactive and educational programs for diverse audiences within the Boston community. Her quartet was also chosen for the Virginia Arts Festival Residency, during which they performed and presented master classes in elementary, middle, and high schools.

Lewis is currently in the Artist Diploma program as the recipient of the Charlotte F. Rabb Presidential Scholarship at the New England Conservatory studying with Miriam Fried. Past summers have taken her to the Ravinia Steans Institute, Perlman Music Program's Chamber Workshop, International Holland Music Sessions, Taos School of Music, and the Heifetz International Music Institute. She is also a regular participant of the Marlboro Music Festival and will be returning in 2021.

Lewis is performing on a violin by Zosimo Bergonzi of Cremona, c. 1770 courtesy of Guarneri Hall NFP and Darnton & Hersh Fine Violins, Chicago.

Pianist Marisa Gupta has a versatile musical life, comprised of solo and chamber music performances, ranging from rare repertoire of the past to a deep commitment towards music of today, performed with heartfelt conviction and a deep intellectual engagement. Born in the USA of Thai and Indian parentage, Gupta made her debut performing Prokofiev's 1st Piano Concerto with the Houston Symphony. She is the recipient of numerous awards, including top prizes at the Concours Maria Canals (Barcelona), the Viotti Competition (Vercelli, Italy), Corpus Christi and Kingsville International Music Competitions, a Solti Foundation Award, a Fulbright scholarship for study in the UK, and many others. She was an Edison Visiting Fellow at the British Library (for the study of early chamber music recordings and performance styles) and was named a finalist by the BBC for its New Generations Thinkers Scheme, an initiative inviting leading British thinkers to broadcast on BBC Radio 3.

Gupta received the Diplôme de Soliste from the HEM Genève in Switzerland, where she studied with Pascal Devoyon. She received her Doctorate at the Guildhall School of Music and Drama, focused on the performance of approximately 50 recently discovered solo piano works by the Catalan composer Frederic Mompou. Other important mentors include Richard Goode, Horacio Gutierrez, and John and Nancy Weems.

Covid Update -- All visitors coming to Pepperdine's campus must purchase a ticket or make a reservation prior to arrival on the Malibu campus. Patrons should be prepared to show their ticket at the Public Safety gate to enter campus. 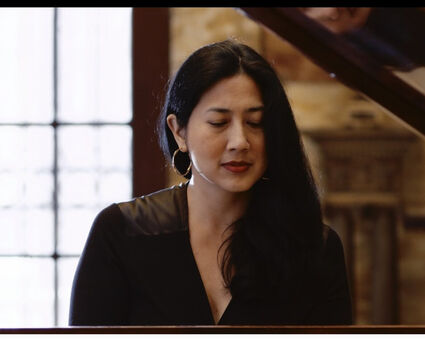 If you have any questions about purchasing or reserving tickets, or if you would like to make a reservation to visit the Box Office in person, contact the Box Office at [email protected] or by phone at 310.506.4522.

The Lisa Smith Wengler Center for the Arts at Pepperdine University provides high-quality activities for over 50,000 people from over 800 zip codes annually through performances, rehearsals, museum exhibitions, and master classes. Located on Pepperdine's breathtaking Malibu campus overlooking the Pacific, the center serves as a hub for the arts, uniquely linking professional guest artists with Pepperdine students as well as patrons from surrounding Southern California communities. Facilities include the 450-seat Smothers Theatre, the 118-seat Raitt Recital Hall, the "black box" Helen E. Lindhurst Theatre, and the Frederick R. Weisman Museum of Art.