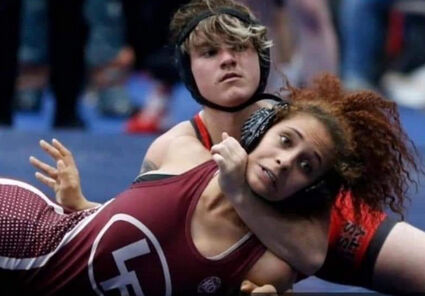 Guess which wrestler is a biological male: teen sports

I absolutely love living in a ''woke'' state while in state prison. Each year the line between female and male prisoners gets thinner and thinner. Soon there will be no systematic differentiation between women and men inside California's state prison system. This could happen sooner than most people think. SB 132 was only the beginning of a campaign. A progressive master plan for total chaos. This is already a place where 'trans' rights now trump those of regular female inmates. If you want to see what the progressive future holds, just look at these prison policies for a window to our future.

Time out. Before I go on. Yes, I know progressive governors and progressive policies are much more likely to help me get out of prison. I analyse politics closely. I'm not stupid! But, I can't ignore men walking past me and not use the written word to scream at the top of my lungs to let the unsuspecting public know what's happening behind these walls! Also, I have NO problems with true trans men and women. When it comes to prisons, prisoners will manipulate any and all policies for our benefit. Up until about 10 years ago, I did that also. So, I can tell you that allowing men to simply and suddenly make a claim to identify female and come LIVE. AMONG. A. WOMAN'S. PRISON. IS a recipe for much more than the normal day on a woman's yard.

Now, where was I?... So, we inmates have within each prison an elected set of representatives called W.A.C. Standing for Women's Advisory Council. Men's prisons have their M.A.C. For the Men's Advisory Council. No More. It's now called I.A.C. across the board. For Inmate Advisory Council at both men's and women's prisons. We are no longer allowed to call ourselves WOMEN! Or call the men MEN! Yes, the sign out front of this prison still says California Institution For WOMEN? It's much much harder to change that. 90% of us are and still claim to be women. But no one cares! If you use the word "woman'' too much, in here, you'll get shut down quick! It's more taboo than even using the "N" word now. Officers are now scared to even call any us "women"! I feel like I live in an episode of 'The Twilight Zone.' I'm in a world I no longer recognize. Basic words like 'man' and 'woman' now mean something totally different. And these changes are increasing in absurdity with each passing day.

I love this woke world we now live in! I know you do too! About 3 years ago, CDCR put out a memo, for the first time, requiring officers to call inmates by different pro-nouns, as chosen by each individual inmate. Female prisoners are now allowed to claim gender dysmorphic disorder and get the T- Shot. Complete with huge displays of "Roid-Rage", as these testosterone shots mess with each person's mind. Nobody seems to care. CDCR's doctors are tasked with "monitoring" these hormone injections. They're willfully blind. That's when I knew this was the beginning of the overt campaign to woke-up the prison system.

Next thing you know all women are now issued boxers as part of our 6-month underwear issue. This is now our current policy. That's mild compared to what happened in 2021. Anatomical males were now allowed to be introduced as 'women' to live in the women's prison population here at CIW. For months, fear swept through the prison as the coming arrival of these men came closer. With many rape and trauma survivors here, we women have always taken comfort that no male could rape or hurt us here in prison. No longer the case.

Nearly all but a small handful of staff disagree with SB 132 but have no power to change it. Before the required mounted body cameras began, I spoke, at length, with many prison officers, doctors and nurses. Why would they have a problem with these progressive, woke policies? The ultimate progressive achievement in corrections is to combine women and men as one! 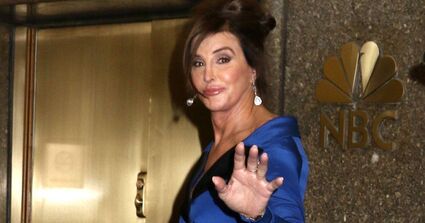 This ''progressive'' utopia is much easier for politicians to achieve within corrections because us prisoners have no rights. We forfeited those when we committed crimes. So, nobody in charge thinks anything about allowing men, with penises, (some with HIV!!) loose within our women's prison yard. I love this. I can't wait be free in society to fully enjoy going to my gym and taking a shower and looking over and seeing yet another penis in the women's locker room. Only to be told, in HIS mind, it's a vagina. "So, don't believe your lying eyes! This is no penis!" I'm so excited. What a sight to see, especially if kids are present?

As I look down at my crotch, I think today is the perfect day to start calling my vagina a penis. Why not? If you can't beat 'em join 'em! I feel left out. If only other people felt like me. Maybe one day there'll be a movement for people like us. Those who just don't want to let go of their naturally assigned sex from birth or their God-given common sense! Could it be, #THE SHE CODE..? Is it the right time to draw the line?