Walmart Pulls Dancing Cactus That Raps About Snorting Cocaine, and Swears in Polish

The dancing cactus sings a song that has lyrics about cocaine, drug abuse, suicide, depression. Not exactly for small children.

When a Polish Grandmother bought a signing cactus from Walmart.com for her four year old grand daughter, little did she know that it would sing "The only thing in my head is five grams of cocaine" in her native Polish.

The Polish rapper says he never gave the Chinese manufacturer permission to use his hit song. He says he plans to sue them to block use of his very adult rap song. 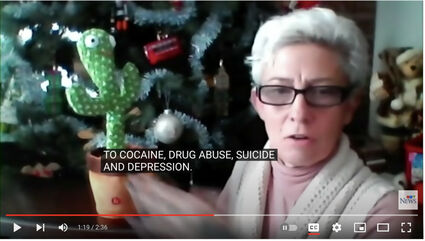 A Brampton, Ontario grandmother who bought an educational toy cactus was shocked when it started swearing and singing about snorting cocaine in Polish, reports CTV. "The dancing cactus sings a song that has lyrics about cocaine, drug abuse, suicide, depression. Not exactly for small children," she says. The song is by a popular Polish rapper, turns out.

Needless to say, social media loved it. "When they mentioned it was "a polish song about depression and cocaine" I whispered "no" under my breath like I just found out my dad was still alive," said one Redditer.

"Love that Polish lady, she seems pretty chill about the song itself - just (rightly) not keen on kiddies falling asleep to a rap about drugs and depression 🤣 I'm glad the artist was told they were being ripped off but kinda sad that Polish-speaking adults won't be able to buy one for xmas now cos this thing is kinda awesome for grown ups," said another.