"The crowd of students began to run toward the gate, smashing everything in the way...." 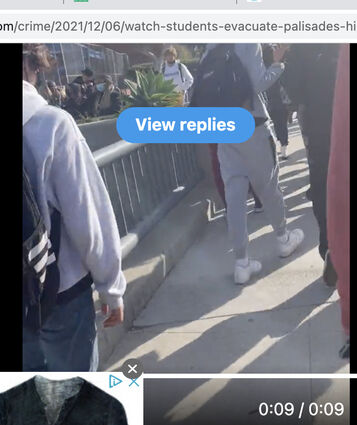 Video of the evacuation from PaliHi was available on Twitter

The word of a shooter at santa monica high school (there was no actual shooter), also caused an evacuation 3 miles up the road at Pacific Palisades High School (Palihi). When parents and students arrived at PaliHi Monday morning at 8:00 am, they found LAPD officers waiting out front. Apparently, word of a rumored school shooter had reached authorities as to PaliHi as well.

Students were sent home from PaliHi later that morning. The press of students all rushing to leave school ahead of the rumored but non-existent shooter, caused a panic. Students crashed through a locked gate, and other damage was done to the PaliHi campus. "The crowd of students began to run toward the gate, smashing everything in the way...." one mom explained on Nextdoor.

From nextdoor about Palisades High School.

Some accounts are that the information relating to Palisades High School was separate and coincidental to the SamoHi situation. By some accounts, Palisades High School also received a threat on Friday about a young man who doesn't attend PaliHi, planning on shooting it," explained one local mom. "Pali definitely did not handled well. All those kids who freaked out and busted the gate?! Apparently there was a photo of a backpack with a gun that circulated among the students and caused panic," she explained.

Samohi principal Antonio Shelton sent an email to parents, saying that he received a "disturbing phone call at 7 a.m. Monday morning about a post on Snapchat." Shelton then contacted police and school security.