The Shore Hotel will open an 80-seat restaurant, a massage service for guests, and a 14-room "micro-hotel." 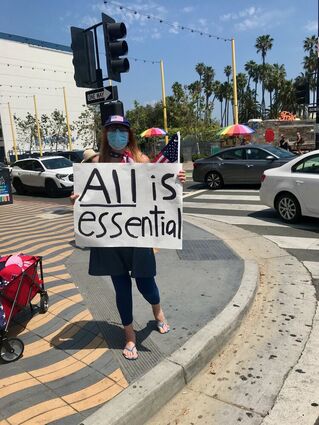 A mask mandate protestor near the shore hotel.

12.10.21: The Santa Monica City Council, in a 4-3 vote, approved new uses sought by the Shore Hotel. The hotel, located across from the Santa Monica Pier, wanted to open an 80-seat restaurant, a massage service for guests, and a 14-room "micro-hotel."

The approval was opposed by the Unite HERE Local 11 union and also by residents who recalled the Shore Hotel's violation of California Coastal Commission rules in its construction. 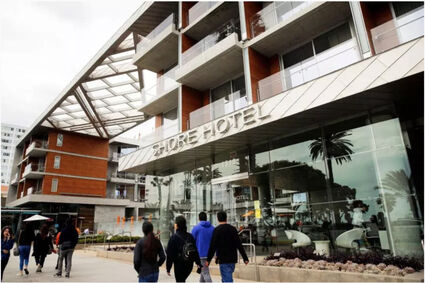 The Shore Hotel will open a 14 bed micro-affordable hotel on Second Street.

The owners had originally applied to the CCC to build a moderately priced hotel but instead built a luxury hotel. They were ultimately fined $17.3 million for the change and directed to make 72 of their rooms "affordable." Council members Gleam Davis and Mayor Sue Himmelrich said this past action put the hotel owners' good faith in doubt.

Council members Phil Brock, Oscar de la Torre, and Lana Negrete, however, all supported the hotel's contribution to the local economy with the new businesses. They also believed the owner, a longtime local family, would keep their pledge to continue hiring local. Brock further noted that the Shore Hotel pays better salaries than the unionized hotels in Santa Monica.

Davis also disapproved of the Shore Hotel's motivation to make money. She said the cafe, restaurant, and massage services "are meant to generate profits for the hotel," while there were already plenty of options for obtaining these services in the immediate area.