During Delta Flight, Actress Slaps 80 Year Old Male Passenger For Arguing With Her About Wearing a Mask

During Delta Flight, Actress Slugs 80 Year Old Male Passenger For Arguing With Her About Wearing a Mask

Actress Patricia Cornwall appears in viral video fighting arguing and slapping with an older male passenger identified by federal authorities only by the initials RSM. Crew members forced her to the back of the plane for the remainder of the 40 minute flight. The FBI took her into custody upon landing. The unidentified man was not charged or detained. 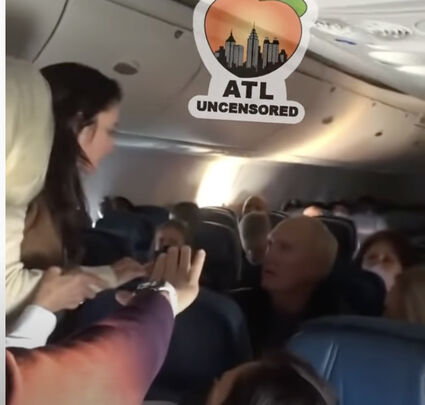 During Delta Flight, Actress Slugs 80 Year Old Male Passenger For Arguing With Her About Wearing a Mask

A 51-year-old ex-Raiders cheerleader, Playboy model and "Baywatch" actress turned jet-setting realtor will probably face federal charges after allegedly hitting an 80-year-old man on an hour-long flight from Tampa to Atlanta on Dec. 23.

The older gentleman was misbehaving too. He was not wearing his mask, and swearing nonstop at Breton. He called her a "bitch," a "pussy" and a "Karen," while dropping F-bombs on a packed Delta Air Lines flight – then she smacked him in the face.