Is Requiring Booster Shots Going to be the Next Heavy-Handed (and Futile) Club Health Officials Foist on the Public?

If there is data to support the measure, they aren't revealing it 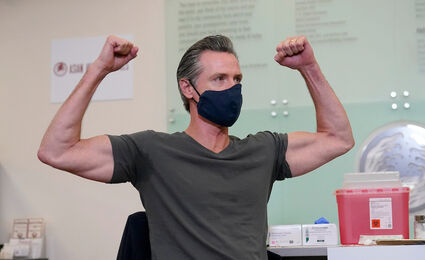 California Governor Gavin Newsom got his booster shot and then wasn't seen for 10 days, canceling his planned visit to the Climate Conference, resulting in widespread theories he'd suffered an adverse reaction. He denied this was the case.

December 28, 2021 - On December 23, Los Angeles County health officials ordered health care workers to obtain booster shots of the Covid vaccine. Citing an uptick in the rate of these highly vaccinated workers contracting Covid-19, the County Department of Public Health stated, "requiring booster doses for all healthcare workers is a key protective step aimed at reducing infections by increasing the numbers of workers with the optimal safety provided by the booster does [sic]."

The state goal is to avoid a shortage of health care workers by helping to ensure they do not become ill with the novel coronavirus. Left out of the equation is whether requiring a booster shot is a viable way to achieve that goal. When the CDC expanded eligibility of Covid-19 booster shots in October, Director Rochelle Walensky was careful to avoid saying these shots would prevent infection. She said those in vulnerable populations would "benefit from additional protection" and added that vaccines "continue to be highly effective in reducing risk of severe disease, hospitalization, and death." She did not add "infection" in that list. A month later when Walensky expanded booster eligibility to all adults, mysteriously, she added that the shots "demonstrated the ability to safely increase people's protection against infection and severe outcomes."

Really? What changed during that month? If new data drove the change in course, what was it? Can we know?

No, we are not allowed to know. Obviously not. Because then we have the potential of coming to a different conclusion from the experts, and they have put all their eggs in the vaccine basket.

Dr. Barbara Ferrer, PhD, MPH, MEd, Director of Public Health, put all her eggs in that basket. She has maintained a constant pitch that everyone 5 years old and over should get vaccinated, that this is our best tool for controlling the pandemic.

Ferrer, PhD, MPH, MEd, is not in a political position where she can reveal the real number of vaccinated individuals contracting Covid-19. She has only released such data five times over the course of the pandemic - and no such data at all since the end of November. The last numbers she released revealed that 64% of the new Covid cases were in vaccinated individuals. With the vaccinated representing roughly 67% of the population, there appeared to be only a marginal difference in outcome regarding infection between vaccinated and unvaccinated.

Neither has Ferrer, PhD, MPH, MEd, released the current number of Omicron cases in the county. Omicron is known to be less responsive to vaccines, at least regarding infection, as has been witnessed in the United Kingdom. 82.2% of their population is double-vaccinated and 56.9% have also had a booster dose. But they are seeing day after day of record-breaking case numbers with an estimate that 5%-10% of the population in London have Omicron, according to CNBC. Neither the vaccines nor the booster shots appear to make much difference, at least regarding infection. Death prevention is another matter. Even as case numbers started to go up in the early part of November in the UK, deaths went down. Deaths are also down in Los Angeles County.

Case numbers is the wrong metric. They are irrelevant. What is relevant is protection from severe illness and death. Any health care worker can transmit Omicron, no matter how vaccinated and boosted they may be. So the emphasis must be on protecting the patient rather than some quixotic effort to prevent transmission. 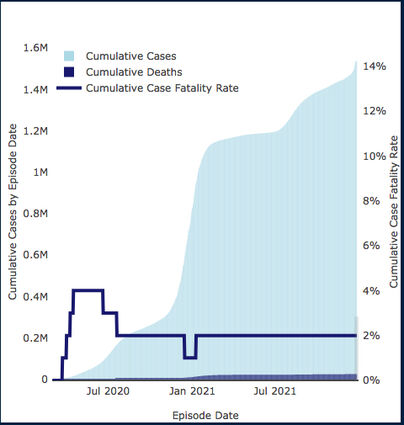 Cumulative Cases and Deaths by Episode Date, LACDPH on December 28, 2021

This graph shows a steady case fatality rate (slope=0, horizontal) of roughly 2%. The rate of deaths (the tiny dark line at the bottom of the graph) is also steady and, as can be seen quite graphically here, far, far smaller than the cumulative number of cases

But Dr. Ferrer, PhD, MPH, MEd, Director of Public Health, has not demonstrated an ability to shift gears and try something different when the draconian and tyrannical measures she has imposed on the public have been ineffective. When case numbers go up, she requires masks, social distancing, and lockdowns. None of those have worked. A year ago when case numbers started to rise in November, she closed restaurants and other indoor gatherings. The case numbers went up the highest they ever have. Her restrictions were useless.

The vaccines are proving to be just as useless, at least in lowering case numbers. If Omicron is indeed the dominant variant in the county - which no one appears to know - then it managed to wipe out the Delta variant in a matter of weeks, an achievement 12 months of vaccines were not able to do.

It doesn't matter. Look for Dr. Ferrer, PhD, MPH, MEd, Director of Public Health, to expand her demand for booster shots outward to the general public. It won't help stop transmission. But she will never admit it.

Either they are terrified of being wrong or they want to keep this epidemic going for political reasons--or both.