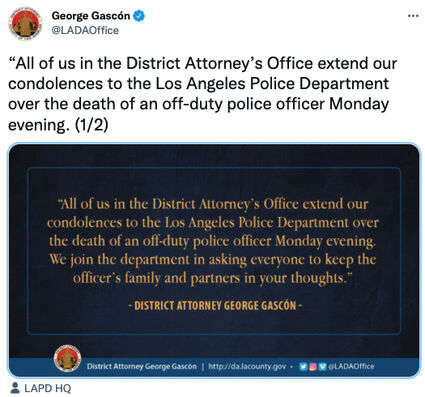 "As Los Angeles experiences a 15-year high in homicides and 54% increase in shootings since 2019, our local District Attorney George Gascon should be prosecuting these murderers to the fullest extent of the law," said Craig Lally, President of the Los Angeles Police Protective League. "Gascon simply doesn't have the courage or conviction to hold soulless murdering thugs accountable. We applaud Los Angeles County Sheriff Villanueva for seeking the federal indictments against these hard-core, violent gang members for the senseless murder of LAPD Police Officer Fernando Arroyos."

A recent tweet by District Attorney George Gascon illustrates his indifference towards crime victims and his nonchalant attitude over the murder of a police officer. Subsequent to the Tweet below, after the identity of the fallen officer was released by LAPD, Gascon has yet to recognize his name. 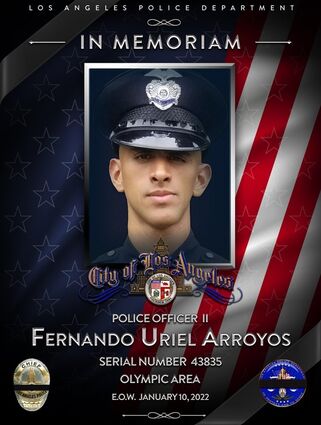 Tweet by the LAPD about their own fallen officer

"When criminal gang members drive around our neighborhoods looking to "make money" through armed robbery, with zero care for human life, it is time to hold those in charge of our criminal justice system accountable, something many of them refuse to do when it comes to criminals preying on innocent residents, businesses, and tourists in Los Angeles," added Lally.

"Shame on George Gascon for enabling these criminals to prey on our city by overseeing a criminal justice revolving door of terror and the pain this terror is causing our residents by Gascon's unwillingness to hold violent gangsters accountable," added the Board of Directors of the Los Angeles Police Protective League.

Gascon hates America and wants to see chaos. The sheriff gets to call in the Feds to get gun and gang enhancements for prosecuting the murderers. Normal citizens don't have that luxury and won't get justice until Gascon is replaced...