The Superior Court order is a major setback in the City's continuing campaign to replace parking with homeless services. 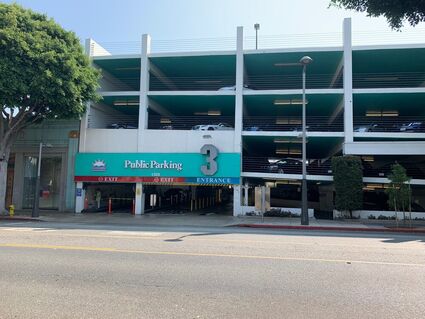 1.13.22: LASC Judge Mitchell Beckloff has ordered the City of Santa Monica not to demolish parking structure 3 and replace it with homeless housing, unless and until certain procedural requirements to do so have been met. The Superior Court order is a major setback in the City's continuing campaign to replace parking with homeless services.

The Santa Monica Bayside Business Owners Association which last month won a TRO restraining the City of Santa Monica from demolishing Parking Structure 3, and replacing it with affordable Housing, has now won a preliminary injunction. This will last for the duration of the lawsuit, or around 18 months, legal experts say.

The SMBOA in December obtained a Superior Court temporary restraining order against the demolition of Parking Structure 3. The City of Santa Monica wanted to demolish the parking structure and replace it with supportive housing for the homeless.

Santa Monica Bayside Owners Association is a group of business owners and real estate investors who have opposed the project slated for downtown Santa Monica. The California Coastal Commission approved the demolition with evidence of questionable value.

From our article dated 12/17/21: The injunction applies against the California Coastal Commission as well as the City of Santa Monica. The Commission accepted evidence that the garage was not needed, based on a typical day in August 2020. The SMBOA argued that this was an atypical day, since it was during the Pandemic.

A TRO is followed in 20 days by a hearing on a Preliminary Injunction. At that time, the Judge may leave the injunction in place, or dissolve it. In general, they leave it in place for the pendency of the lawsuit, e.g. for the next two years.

It is extremely difficult to obtain a TRO from a Superior Court, reversing a planning and zoning action. Construction permits are ordinarily considered within the sound discretion of municipal authorities, and of the Coastal Commission. Ordinarily a TRO indicates procedural irregularity or striking lack of evidence. 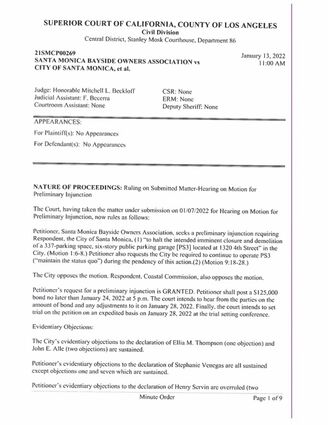 The City has deferred maintenance issues on the garage citing its imminent demolition. The result has been use of the garage by vagrants and meth addicts, who leave behind trash and human waste and have started several fires. Stairwells are often used by vagrants as bedrooms and the elevators are not usually operational.

On Friday December 17, 2021 in Superior Court at Stanley Mosk Courthouse in Downtown Los Angeles, Judge Mitchell Beckloff heard the Santa Monica Bayside Owners Association's (SMBOA) Ex Parte Application for an Order advancing the Hearing on SMBOA's Motion for Preliminary Injunction against the demolition of Parking Garage 3, and issued a Temporary Restraining Order against the City to maintain the status quo in the interim.

Good. The Virtue signally Santa Monica City Council's obsession with the homeless ie vagrants has been out of control for decades. It is destroying the quality of life but it makes these idiots feel good about themselves...