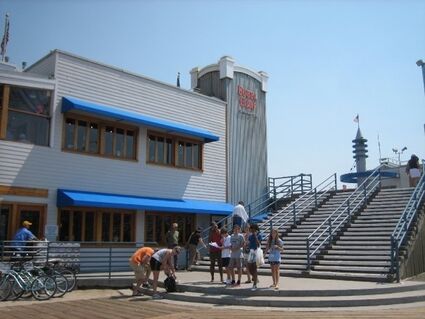 The stairs leading to the Bubba Gump Shrimp Co. and the Pier

January 11, 2022 - On Saturday evening, SMPD were able to arrest a female suspect in a vendor altercation incident that occurred in November. The original incident on November 21 involved two female illegal vendors at the base of the Bubba Gump Shrimp Co. stairs. The female victim told arriving officers that she had been challenged by another female vendor to fight. The victim took out her cell phone to record her antagonist's actions. The challenging female, later identified as Michelle Antonia Murcia, 18, of Los Angeles, then became angry. She pushed a hot dog cart at the victim, causing hot oil to spill onto the victim's arms and hands.

Murcia was able to leave the scene before emergency personnel and police arrived. 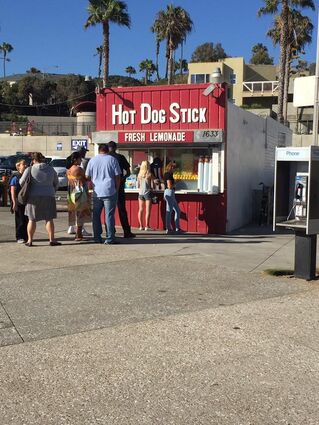 Hot Dog on a Stick

Murcia is the last name of the family reputed to run the illegal vending carts on the pier. According to information supplied by a city official and documents from the city's Code Enforcement Officer's, the Murcia family brings dozens of the illegal carts, which have no licenses to operate nor health department certificates, to operate on the Santa Monica Pier and environs. They have been involved in numerous altercations among the vendors and with others.

The city has been attempting without much success to keep the vendors off the pier. State law decriminalizes street vending, so arrests cannot be made unless other criminal activity, such as this assault, occurs.

On Saturday, January 8, Santa Monica police observed Michelle Murcia standing in front of Hot Dog on a Stick. She was detained and taken into custody without incident. Murcia was booked for 245(a)(4) PC – _Assault with a Deadly Weapon.

Anyone with additional information pertaining to this incident is strongly encouraged to contact Detective Spenser 310-458-8420 or the Watch Commander (24 hours) at 310-458-8426.