I am often skeptical of reports like this one, but it comes with video that just can't be ignored. A pilot believes he saw a series of UFOs while flying over the Pacific Ocean. He captured a video clip of the 12 lights, apparently rotating and moving at high velocity. The clearest UFO video in years shows 12 lights moving in formation at high velocity.

In the video, the pilot can be heard saying: "I do not know what that is. That is some weird s**t. That is something flying."

The pilot then shared the video, filmed at 39,000ft, on social media. Some praised it as the best UFO clip they had seen, while others wondered if this could be the North Korean offensive missile test. 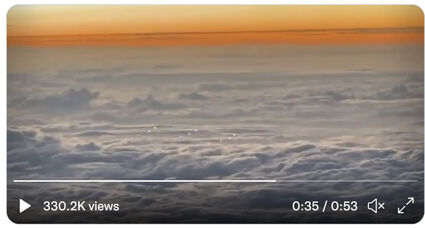