Downtown Ambassador Program is Not Saving the Promenade, Which Largely Belongs to Homeless Vagrants Now

Promenade is considered "not attractive to business" by prospective retail tenants 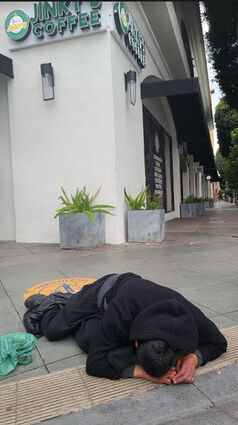 Police say their policy is to let the homeless remain (even if comatose, apparently) until the businesses open around 10 or 11 am.

February 2, 2022 - Squalid conditions downtown and on the Third Street Promenade appear to be causing much of the vacancies in retail spaces visible there today. The downtown and Promenade area were already ailing before the lockdowns of 2020, with an increasing presence of vagrants who appeared to need drug rehabilitation or mental health services. But once the Covid-19 lockdowns closed all retail businesses that weren't labeled essential and after the riot on May 31, 2020, the situation worsened considerably. The vagrant population used the opportunity to completely take over the area. Today, it is estimated that less than 12% of Santa Monica residents venture to come to the downtown area.

Promenade property owner John Alle shared with us an email from a prospective tenant for one of his retail spaces. The prospect was not interested in the space, writing, "the Promenade is in total disaster right now." The prospect's opinion was that a vacancy rate of over 50% would not result in sufficient foot traffic and business.

"High crime, drugs and so many homeless in addition to possibly losing a parking structure being the space" were other factors that were "not attractive for any business." The prospective tenant considered the construction of affordable housing on the demolished parking garage site as yet another negative factor militating against renting the retail space on the Promenade. His opinion was that "city officials don't really care of know what they are doing."

The prospective tenant said he had counted seven people in front of seven different storefronts, "and one person motionless on the corner curb at 2nd Street." He had to speak to two different Ambassadors before one would call the paramedics for the unconscious person at 2nd Street.

According to Alle, the Promenade is riddled with crime and fear. Merchants close at dusk so their employees can get home without being attacked. Employees say they are afraid to get on any shared public transportation.

There are two to three "enter and grab" robberies on the Promenade every week. The store owners feel it's a waste of time to even file a report. Buildings are vandalized nightly with an average of 3 smashed storefronts a month, on the Promenade alone.

The perpetrators of these crimes are not removed from the area. Alle says his building camera filmed the individual who smashed the Adidas storefront on Thanksgiving morning. Two weeks later, Alle saw this same person hanging out on the same block of the Promenade. 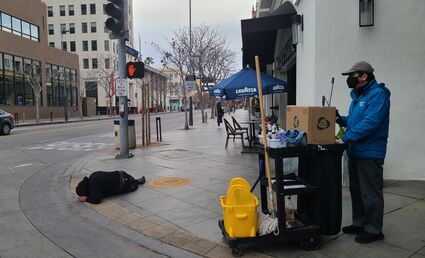 The Downtown Ambassador program costs taxpayers more than $450,000 - per month. Alle claims, "there is nothing to show for it."

According to Alle, "(90%) of the businesses in Downtown (local owners, store managers and real estate directors of the few remaining national retailers) told us they felt the Ambassador Program should be scrapped and the money would be much better used by Santa Monica Police Chief Ramon Batista and his department."

The unavoidable fact is that whatever the city is currently doing is not working to clean up the area, reduce crime, and get the homeless the help they so obviously need.