"He's already found two guns on the Promenade, and one gun on the Santa Monica Pier ... " 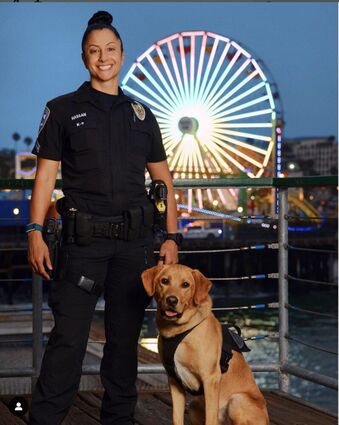 K-9 Jack is an explosives expert at moving and static explosives; a fine distinction we'll explain in a moment. We met the yellow Labrador and his trainer, Officer Elaina Hassan, playing catch on the lawn in front of the Santa Monica Courthouse.

"We got him on a federal grant," explained Hassan, Jack's full time trainer. "He's already found two guns on the Promenade, and one gun on the Santa Monica Pier. Not to mention numerous suspicious packages," she said. The packages were either at the SM Courthouse, or found on concerned resident's front porches.

"The package is OK if he walks by it," she says, tossing a ball to her best friend. "But if he sits, that's an alert that he smells something off. It's an alert the package is suspicious and if he continues to stay and he doesn't if he go by, we check it out more closely."

"If he walks by without any interest that means the package is OK. Nope there's nothing here so we don't have to call the bomb squad in," she says. 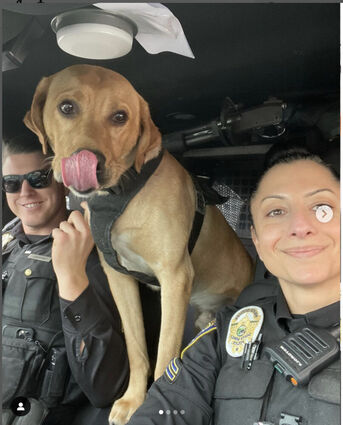 Hassan has a masters in leadership and a bachelor's degree in justice studies. She has been with the SMPD for almost five years. She "underwent 7 weeks of training with K9 Jack in Alabama," Hassan says. In Alabama he learned to be a Vapor Wake K-9, a dog who specializes in moving explosives.

Hassan and Jack are together 24 seven she explains. " I'm very fortunate because he is a very good boy! He has a ton of energy so we are always playing tug of war or fetch. But he doesn't chew up furniture or anything like that," she says.