Criminals are Good; It's Guns that are Bad, According to DA George Gascon 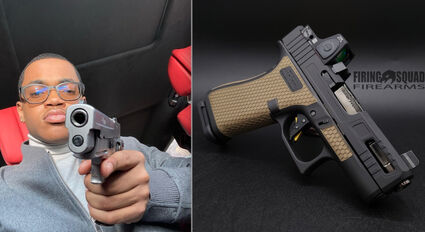 Which is more potentially dangerous: the guy with the gun or the gun?

February 8, 2022 - Today our alleged district attorney, George Gascon, boasted about a letter his office sent out to Visa, Mastercard and Amex begging them to cease processing payments made to companies that sell "ghost guns." Ghost guns are made from kits of gun parts sold over the Internet. Lacking serial numbers, they are unregistered and untraceable.

Seriously? This - this - is how Gascon intends to react to the amazing spike in violent crime in Los Angeles County? Homicides increased 94% between 2019 and 2021 in the county, according to LA County Sheriff Alex Villanueva speaking in January. "I think throughout the entire United States it's probably one of the biggest jumps ever," Villanueva said.

While Villanueva admits that ghost guns are used in many crimes, he was more concerned about the hiring freeze on his department and the policies of our supposedly public-safety-conscious district attorney.

Gascon drastically changed the focus of the district attorney's office from the minute he was sworn in. He immediately dropped cash bail from almost all offenses (including many that are indisputably violent), refused to prosecute many crimes, and refused to allow certain enhancements to sentencing - including (surprise surprise) enhancements involving the use of a gun in the commission of a crime.

So it is no shock, actually, that instead of enforcing laws to lock up the criminals who are using guns to commit crimes, Gascon thinks he can solve the problem by getting rid of the guns. And he seeks to do so via extra-legal methods. Because he seems to be unaware of the fact he is the chief law enforcement officer in the county, bound to enforce and uphold, well, THE LAW.

To the executive officers of the credit card companies, urging them to stop processing gun kit transactions, Gason wrote, "there is a difference between what may or may not be technically legal and possible and what is most assuredly wrong." See, taking money for a legal transaction is wrong. But refusing to charge criminals and try to incarcerate them so they cannot commit more crimes - that is right.

"[Mastercard/Visa] has the ability to go beyond what any law enforcement agency, legislature, or city council can accomplish," Gascon wrote, displaying proudly his utter disregard for the law, legislature, and his own agency.

Which would you rather encounter: the guy with the rifle or the rifle?

Gascon must feel he has no choice but to shift the blame for the rise in crime since he took offiice. He thinks it safe to shift it onto something inanimate that can't talk back. But even Gascon's own statistics don't argue in his favor. He says that during the first 11 months of 2021, 1,780 ghost guns were recovered by law enforcement, those ghost guns he is blaming for the spike in crime. But in a separate news conference by the Mayor of Los Angeles, Garcetti said that 8,650 illegal firearms were taken off the streets. Therefore, most of the guns used illegally - just in the City of Los Angeles - were not ghost guns.