In an obvious retaliation against business owners who are suing to keep the garage open, the city cordons it off, cutting off Super Bowl benefits for these retailers

February 10, 2022 - On the same day the city was told they could not immediately demolish Parking Garage 3 in downtown Santa Monica, they closed the garage, cordoning it off to cars. The garage has been a bone of contention between the city government and downtown business owners since the city decided a new affordable housing project would be better on the site adjacent to the Third Street Promenade than 336 spaces of parking that had existed there for decades. The business owners believe the parking is essential to sustain their profitability.

The fate of the garage has seesawed wildly over the past couple weeks. At the beginning of the month, the court dismissed a lawsuit filed against the structure's demolition by the Santa Monica Bayside Owners Association because of a missed filing deadline. On February 4, the SMBOA won a second, temporary stay of demolition. This morning, a California Appeals court made that injunction permanent, "pending disposition of the instant petition or further order of this court."

However, the city moved forward in cordoning off the garage in accordance with a press release they issued just before the temporary stay, in which demolition had been scheduled to begin February 14.

According to SMBOA member John Alle, the injunction won today prevents the city from removing items from the garage or demolishing it, but does not prevent the city from ceasing to operate the garage. 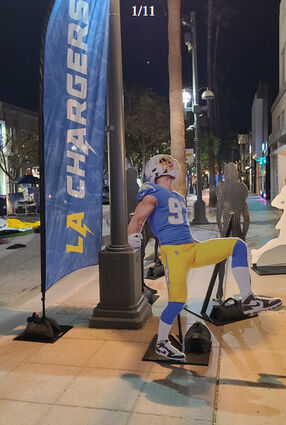 Business owners and taxpayers paid for expensive props and signage to entice Super Bowl fans to the Promenade - but there will be no parking in the 1300 block.

The timing of the city's move could easily be viewed as punitive. The city and business owners have spent significant funds in advertising and decorating the Promenade in order to entice Super Bowl attendees to come and spend money at the stores there. Closing Garage 3, however, restricts access to the Promenade and Downtown on "what may be the busiest weekend in years," according to Alle.

Alle says retailers and the city had the potential to generate millions in dining and retail sales via Super Bowl weekend traffic. "But the City closes the Garage closest to its main Super Bowl set-up," Alle said.

The city claims Garage 3 is under-utilized, based on its usage during one "average" day in August, 2020 - during the pandemic lockdown. A parking study done by business owners argued otherwise, claiming the garage averaged 1,000 cars per day, indicating more than 3 turns per day. The garage's value was estimated to be $29 million per year.

Santa Monica is run by Leftist tyrants who don't care anything about the businesses that generate tax revenue for the city or the tax paying residents. Santa Monica is the canary in the coal mine. This is the end result of 4+ decades of Leftist rule. The city pays it's employees ridiculously high salaries... see Transparent California website... and couldn't care less what the actual residents think. Vagrants have more rights than residents. It's shameful and it should be a warning to the rest of the country...

Hardly punitive- the city put out a press release it was being closed on Feb 10 a week ago today.