As If Struck by Lightning, a Flock of Birds Falls Dead From the Sky

What was it that caused a flock of yellow headed blackbirds, to fall from the sky in Chihuahua, Mexico?

A flock of birds falls from the sky Feb. 11th in Chuhuahua, Mexico.

2.11.22: Some were reminded of Alfred Hitchcock's movie "The Birds," when surveillance footage captured a bizarre moment. One Tuesday afternoon, ordinary life in a neighborhood in Mexico was interrupted when a flock of birds fell from the sky mid-flight.

A local veterinarian told police in the northern Mexican city of Chihuahua that the birds could have died after inhaling toxic fumes. But others believe it's more likely that they were struck by lightning mid flight.

"Those were invasive European Starlings," speculated another man. "From time to time the leaders of the flock dive too low and the flock follows them, the birds above drive those below into the ground. I'm in Canada and I see them do that from time to time," he posted to youtube.

Scientists say the birds were more probably yellow headed blackbirds. The prevailing theory among biologists, is that the birds were killed as they smashed into the ground while trying to escape a predator. 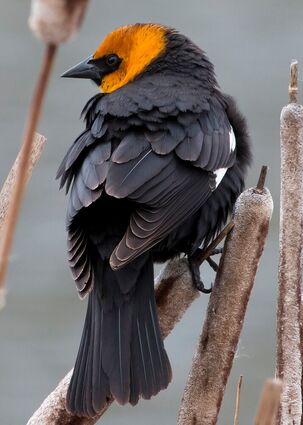 These birds migrate in the winter to the southwestern United States and Mexico. They often migrate in huge flocks with other species of birds. The only regions of the United States where these blackbirds are permanent residents are the San Joaquin Valley and the Lower Colorado River Valley of Arizona and California. It is an extremely rare vagrant to western Europe, with some records suspected to refer to escapes from captivity. When migrating, males and females travel separately. Males typically arrive at the breeding marshes 2-3 weeks before females during spring migration.[5] Research suggests that females choose breeding sites based on the reproductive success (number of young per breeding female) of the site in previous years.

The breeding habitat of the yellow-headed blackbird are marshes in North America (mainly west of the Great Lakes), particularly in plants such as cattails. There winter range does include Northern and central Mexico.