On Day II, It Seemed that the 2022 Genesis Golf Invitational Would Become the Joaquin Neimann Run Away and Hide.

Neiman posted a score that would lead late arriving pros to suspect that they overslept and missed a round; Justin Thomas played well enough to justify his choice of pants. 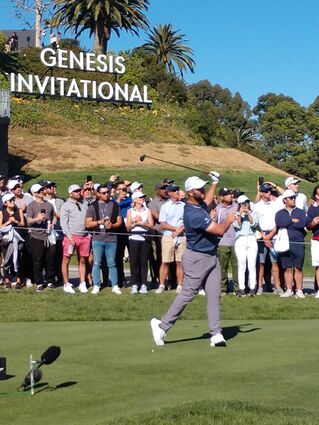 John Rahm reacts with dismay as his tee shot veers wildly to the right, leading to a bogey on the 305-yard 10th hole

Midway through the second round, it looked like the 2022 Genesis Invitational was going to turn into the Joaquin Neimann Run Away and Hide.

Chile's best-known PGA  tour member-and, other than Mito Pereira, its only one-opened the tournament with a record-tying first round score and promptly broke the rule that the hardest thing to do was follow up a great round with a good one.

Neimann's second round was not better than his first round, but it was exactly as good.  His second 8-eight 63 in a row was kicked off by an eagle-3 on the first hole, capped off by a 34-foot putt.

He then birdied the tough par-4 second hole with a 15-foot putt.  Things quieted down for him, with only a tap-in birdie on 7 through the next five holes.

Riviera tried to shake him on the turn from front to back. Niemann drive right down the middle in 8, which unfortunately features split fairways with a large waste area in the middle.  Neiman disappeared from view in the center gully, but his ball somehow found the green and he saved par.

He then birdied the ninth hole to get to thirteen under, but the short but devilish 10th hole caught him, where a poor drive and two poor chip shots combined with two putts to give him his first and only bogey of the day.

It looked like Niemann was truly rattled when he hit his worst tee shot of the day on 11, his drive skidding 226 yards off the tee to run into the edge of the driving range fence left of the tee.

His recovery shot barely cleared the barranca dividing the hole, but held the fairway.  Neimann then dropped the ball 12 feet from the hole and converted his birdie putt to reach 13 under par.

He cruised in from there, adding three more birdies to hit the clubhouse at 16-under par, a two round score low enough to win most years at Riviera.  Coming in after a 7:24 tee time, Neiman posted a score that would lead late arriving pros to suspect that they overslept and missed a round.  His 16-under par is a new low score record for the first two rounds.

The only player close to Neimann was American pro Cameron Young, a rookie on tour, who followed up an opening-round five-under par with a round better than either of Neimann's rounds.  Young's nine-under 62 began with a front-nine score of 29, featuring six birdies in nine holes.  He cooled off on the back side, with just three birdies and none on the gettable par-5 holes.  If Neimann were not overshadowing everyone, Young would be the story.

Neimann has a five-stroke lead over Justin Thomas in third place.  Thomas, resplendent in vibrantly purple slacks, shot seven under to come in with an 11-under score that would be comfortable leading most years at Riviera.  His lead over fourth place is two strokes, where veteran Adam Scott sits at nine-under.  Scott, a former winner at Riviera, did not do much last year, his 21st on the tour, but the Aussie always plays well here and cannot be counted out.

Tied with him is Jordan Speith, the former precocious world number one who has been struggling to consistently play to his incredible potential.  Speith has been in contention through three rounds in a lot of tournaments and seem s to be regaining form, but the weekend will show if this is the week that his comeback culminates.

Collin Morikawa sits one stroke back of him at 8-under.   Morikawa, a Los Angeles native, is a rising star on the tour, with two major victories.  He has the raw talent and ability, if anyone does, to come roaring back from eight strokes behind in two rounds. Neimann and Young have laid down a big challenge to the rest of the field, but the tournament is certainly not over yet.

The tournament is over for some big names, however.  Among the big names that missed the cut are Dustin Johnson, Bubba Watson, Brooks Koepka, Kevin Na, and Patrick Reed.  Others still in it but way back include Rory McIlroy (-3), Paul Casey (-3), Sergio Garcia (-3), Tony Finau (-2), Sahith Theegala (-1), Matt Kuchar , UCLA's Patrick Cantlay, John Rahm, and Rickie Fowler (all at even).

It's telling that McIlroy, sitting 13 strokes off the lead, is tied for 22nd place.  Niemann and Young have set such a record pace that they must come back to the field, right?  We'll find out on the weekend. 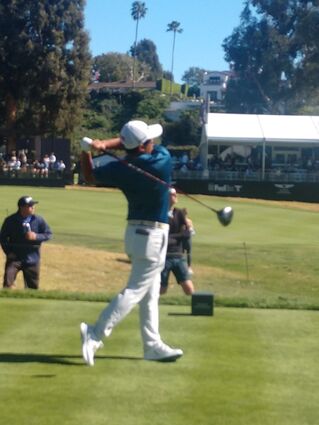 Event information:  Fans attending the tournament must show proof of vaccination or a negative Covid-19 test result within the last 24 hours from a lab antigen test or 48 hours for a PCR test.  Masking is required unless actively eating or drinking.  Parking is available at Santa Monica's downtown parking structures with free shuttles to the entry gate- no parking is available at or near the course.

There are no on-site ticket sales, and the event is entirely cashless.  Holders of Citibank credit cards get discounts at vendors and admission to a hospitality area.  There are a substantial number of food and drink sales locations on the course, a picnic area with food trucks, and many promotional  pop-up stands offering samples, experiences, and games with prizes.