In an Apparent Prelude to Invasion, Putin Recognizes Breakaway Ukrainian Republics of Luhansk and Donetsk

Zelensky now faces the choice of retreating to the Dniepr river, or losing the Ukrainian army in a one way war with Russian armed forces. 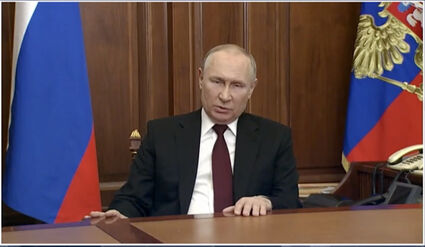 2/21: In a 20 minute speech, Putin told the Russian and Ukrainian peoples that they are "one people," in a prelude to invading Ukraine.

In a move that some analysts said would lead to sending in the Russian Army across the border and into Ukraine, Russian President Vladimir Putin has recognized the break away Ukrainian areas of Donetsk and Luhansk.

Separatists in those areas, supported since 2014 by the Russian Army, have declared themselves independent Russian speaking regions. The separatists however control only about a third of the territories of those provinces. They will no doubt request the urgent assistance of the Russian Armed Forces, in battling the Ukrainian army.

"Ukrainian President Vladimir Zelensky will be left with the alternatives of ceding those areas to Putin, or destroying the Ukrainian army," said US Retired General Jack Keane, speaking on Fox. Keane said the Ukrainian army lacks the heavy artillery, aircraft or tanks to defeat the Russian army, even in a limited conventional conflict.

In a 20 minute speech, the former KGB agent questioned whether Ukraine had any right to independence from Russia in the first place. Putin has accused Ukraine of “genocide” against the regions, claiming Kyiv has mounted intensifying military attacks. The claims were rejected as disinformation by Ukrainian officials Monday. Putin has produced no evidence for his accusation. 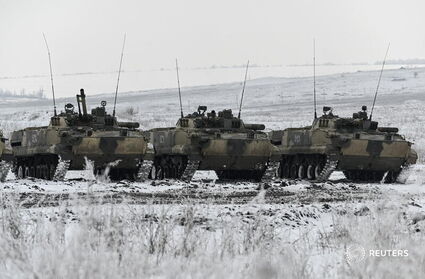 Ukrainian army tanks are 25 years old on average, much older than the latest Russian models.

"Russian President Vladimir Putin signed a decree on Monday recognizing the independence of the separatist Donetsk People's Republic and Luhansk People's Republic in eastern Ukraine's Donbas region, The New York Times reports. During a speech, Putin also demanded the end of Ukraine's military operations in the separatist areas, per AFP. The announcement came on Monday after Putin held a meeting of Russian national security officials. Ursula von der Leyen, president of the European Commission, Tweeted that the move "is a blatant violation of international law.""

Reaction was swift. The Biden administration imposed sanctions prohibited investment in Luhansk or Donetsk, which of course is a useless move since no sane US person would invest in either region today. Finland has quietly said it will ask for NATO membership.