Biden Announces More Sanctions Against Russia, but not the Removal of Russia From the Swift Financial System

Biden says Putin has much larger ambitions than Ukraine, he wants to re-establish the former Soviet Union 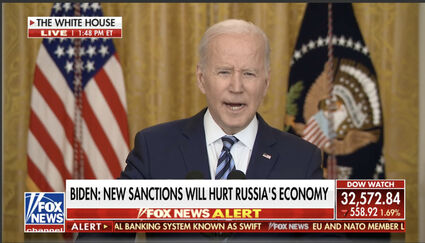 President Joe Biden announced "strong sanctions" against Russia Thursday morning, calling it a "major hit to Putin's long terms ambitions." As expected, he said Russia would be excluded from dollar capital markets, and that there would be sanctions on Russian individuals and banks. However, he did NOT announce that Russia would be excluded from SWIFT at this time. More on that below.

He said that "our forces will not be engaged in the conflict in Ukraine," but that more forces will be deployed to NATO countries. Biden mentioned Poland, Latvia Lithuania and Estonia in particular.

He noted that prices were rising at the gas pump, and asked US oil companies not to raise prices "to exploit this moment." He said the US would attempt to secure supplies and avoid shortages.

"I know this is hard and that Americans are already hurting. But this aggression cannot go unanswered. America stands up to bullies, we stand up for freedom."

"If Russia pursues cyber attacks against our companies, we are prepared to respond. I spoke last night to President Zelensky and said that we would stand up to Russia for him."

"Time and again swift gains in territory swiftly give way to acts of mass civil disobedience. Put has unleashed a get pain on them, but they have repeatedly showed they will not allow.

Putin has unleashed an assault against the legal structure that maintains world peace. This is about naked aggression and Putin's desire for empire at any cost. War without any cause. A sinister vision for the future of our world. IT is a vision that freedom loving nations will oppose. We will emerge from this stronger. This will cost Russia dearly economically and in terms of security. Putin will end up a pariah on the world stage."

When history is written, this will leave Putin weaker. NATO is united like never before. He is testing the resolve of the West."

From NBC News: The Society for Worldwide Interbank Financial Telecommunication, or SWIFT, is a cooperative of financial institutions formed in 1973 and headquartered in Belgium. It is overseen by the National Bank of Belgium with cooperation from other major central banks, including the U.S. Federal Reserve System, the Bank of England and the European Central Bank. 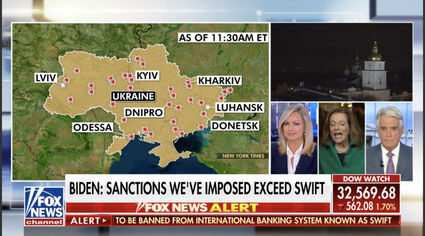 Russia will not be removed from SWIFT at this time.

But SWIFT is not a traditional bank and does not transfer funds. Rather, it acts as a secure messaging system that links more than 11,000 financial institutions in over 200 countries and territories, alerting banks when transactions are going to occur. (For instance, American banks have a unique SWIFT code that customers use for incoming wire transfers in U.S. dollars.)

In 2021, SWIFT said it recorded an average of 42 million messages per day, an 11 percent increase from the year before. In 2020, Russia accounted for 1.5 percent of transactions.

What would be the effect on Russia? For the U.S. and its European allies, cutting Russia out of the SWIFT financial system would be one of the toughest financial steps they could take, damaging Russia's economy immediately and in the long term. The move could cut Russia off from most international financial transactions, including profits from oil and gas production, which accounts for more than 40 percent of the country's revenue.